An Aerial Survey of Metro Boston Reveals a Regional Food System on the Rise
By Alex MacLean, June 23, 2021

Across four decades as an aerial photographer, I have been drawn to documenting agriculture for the way it reveals important clues about region, climate, topography, soil, and the passage of seasons and time. This work has increasingly focused on the connections between land use and climate change, as attention to shortening food miles—reducing the distance between producers and consumers, with the goal of lowering carbon emissions and minimizing supply chain disruptions—visibly plays out across rural–urban transects. The images in these pages represent the first steps in an inquiry into how food production in and around urban areas in the United States is changing.

Despite these promising changes, what is commonly understood as the locavore movement has done more to create a sense of place, build community, and educate around food than it has to increase food security or shorten food miles at the scale necessary to confront climate change. While demand and enthusiasm for local food has grown over the last decade, an estimated 90 percent of food in the Boston metro area comes from outside the region, according to Food Solutions New England (FSNE), a regional network based at the nearby University of New Hampshire. But policy makers, investors, farmers, and entrepreneurs in the area are working to change that, and FSNE is advocating for “50 by 60”—referring to the percentage of food that could be regionally sourced by 2060.

One trend that could help reach that goal, also visible from the air, is indoor farming. Most commonly located in undervalued industrial neighborhoods, indoor farms use technologies like hydroponics and LED lighting to enable year-round cultivation. The companies behind them are increasingly demonstrating that a lack of open space does not have to be a constraint on food production. The indoor farming industry attracted $1.9 billion in global venture capital in 2020, three times the amount committed in 2019.

Boston is home to some of the companies gaining the most momentum. Freight Farms, for instance, further democratizes proximity to production through the use of retrofitted shipping containers that can be tucked beneath elevated highways or squat next to school cafeterias. In 320 square feet, these containers yield as much produce as two cultivated acres. Such innovative solutions give insight into what alternative growing can look like as climate change degrades farmland and shrinks water supplies. However, indoor farming has its drawbacks; it can be energy intensive and, although its yields are often marketed as “local,” in some senses it replicates the centralization and corporate influence against which local and regional agriculture advocates have long chafed.

As an aerial photographer, I hope some form of outdoor food production will always be integrated into our landscapes. Whether viewed from the ground or from the air, farms and fields help us understand the key elements of the natural world that sustain us, providing a connection to the planet and an impetus to protect these places. But from above, it is increasingly apparent that a reimagining of agricultural systems is underway, and that we will need many different approaches for “local food” to evolve into an equitable model of regional food sovereignty. 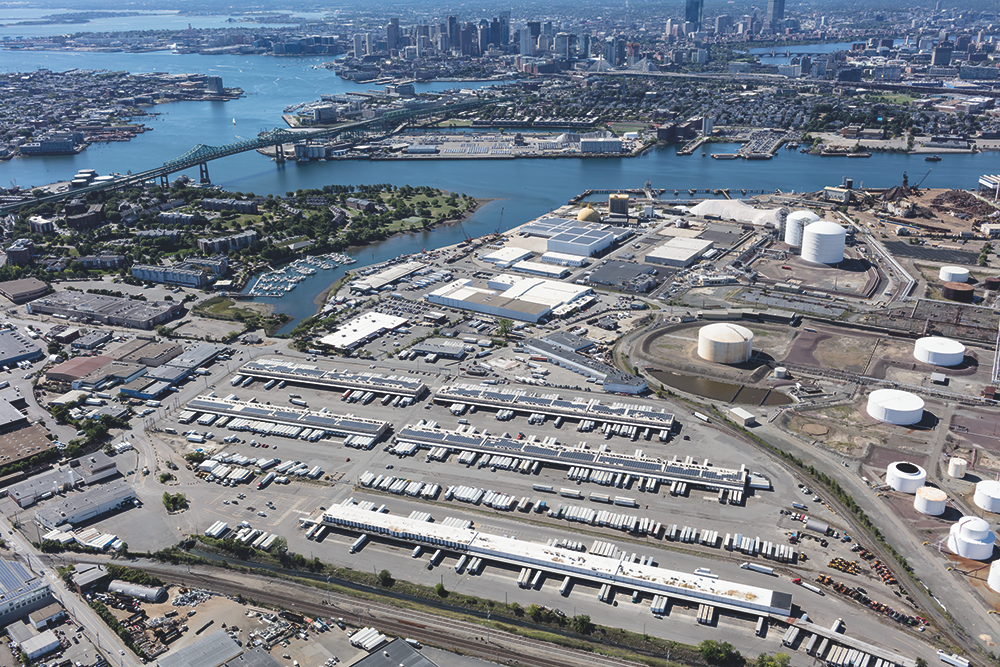 The Boston metro region imports 90 percent of its food from outside the region. Above, box trucks and refrigerated trailer units line the New England Produce Center warehouses in Chelsea, just north of downtown Boston. Among the largest wholesale produce markets in the world, the complex receives shipments from across the United States and internationally. Produce is then redistributed to food outlets throughout New England and southeastern Canada. Credit: Alex MacLean. 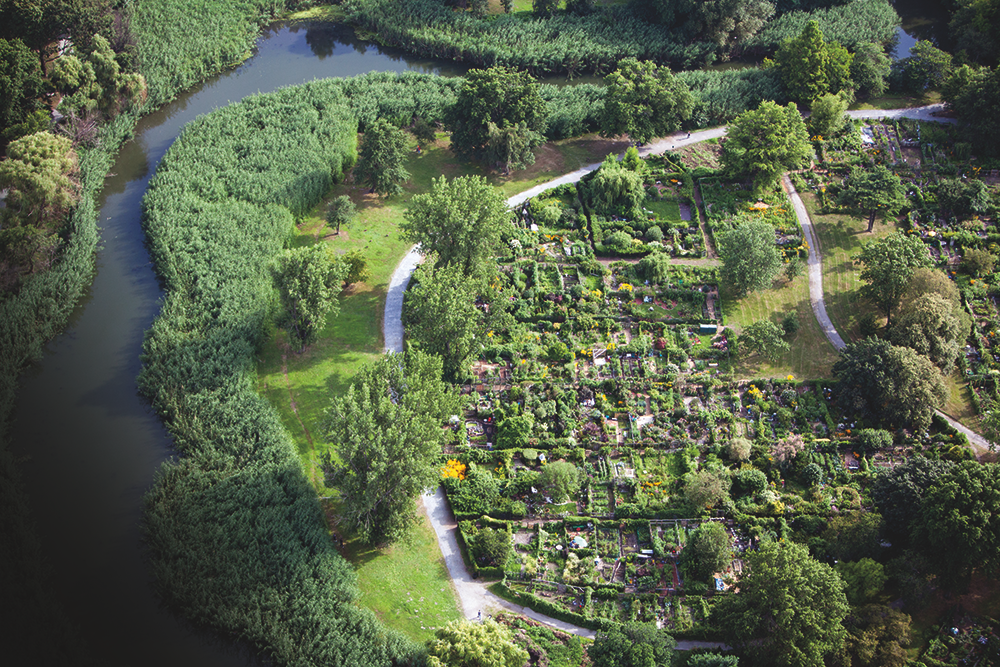 The renowned Fenway Victory Gardens along the Muddy River in Boston’s Back Bay are made up of over 500 plots that remain on land that was dedicated to food production during World War II. Fenway was one of over 20 million victory gardens across the country that contributed to growing roughly 40 percent of the nation’s produce at the height of the war. The history speaks to the potential to adapt and to grow local produce on a large scale. Credit: Alex MacLean. 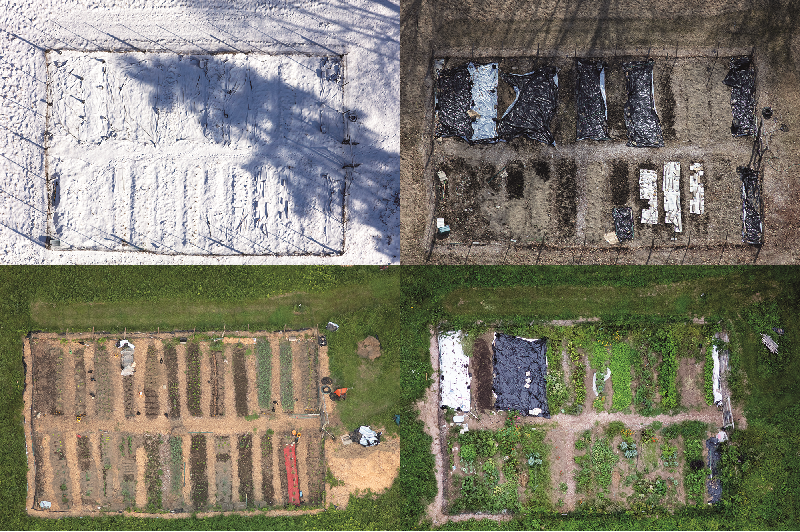 The community garden at the First Parish Church in Lincoln, Massachusetts, seen in four seasons. Changes in the garden throughout the year are a time marker that affirms our awareness as we transition through seasons. Parishioners grow individual plots and collectively grow a donation plot that provides an average of 600 pounds of food each year to Boston-area homeless shelters and soup kitchens. Credit: Alex MacLean. 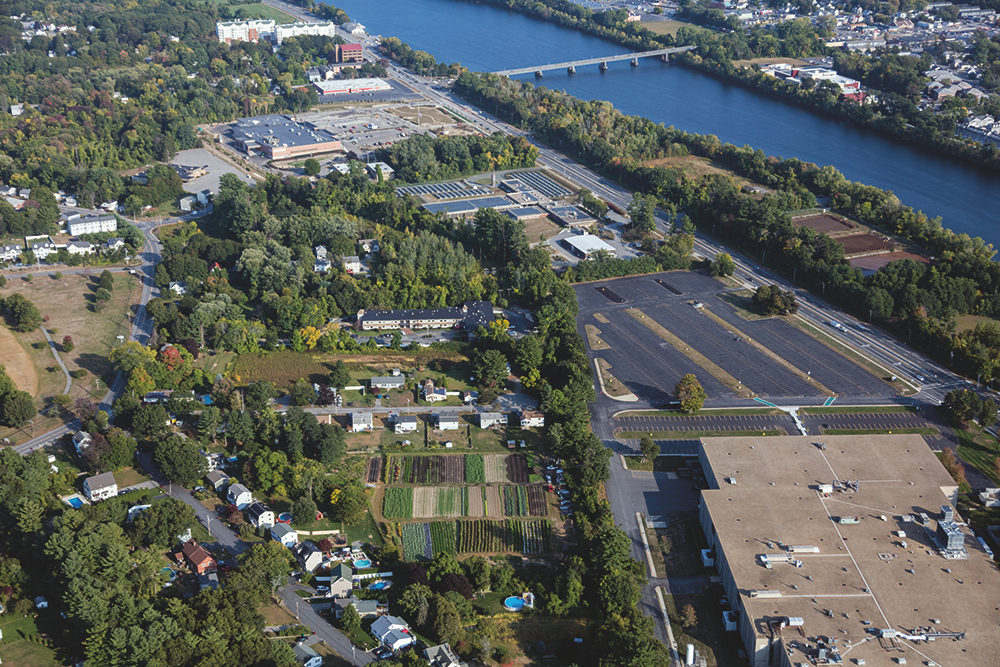 The Largest of Mill City Grows’ four farms, “Big Farm” is situated on 2.8 acres leased from the city of Lowell, Massachusetts. The food from these farms is distributed through mobile markets, a Community Supported Agriculture farm share program, and donations. In working toward local food justice, Mill City Grows also partners with schools to support educational and community growing initiatives. Credit: Alex MacLean. 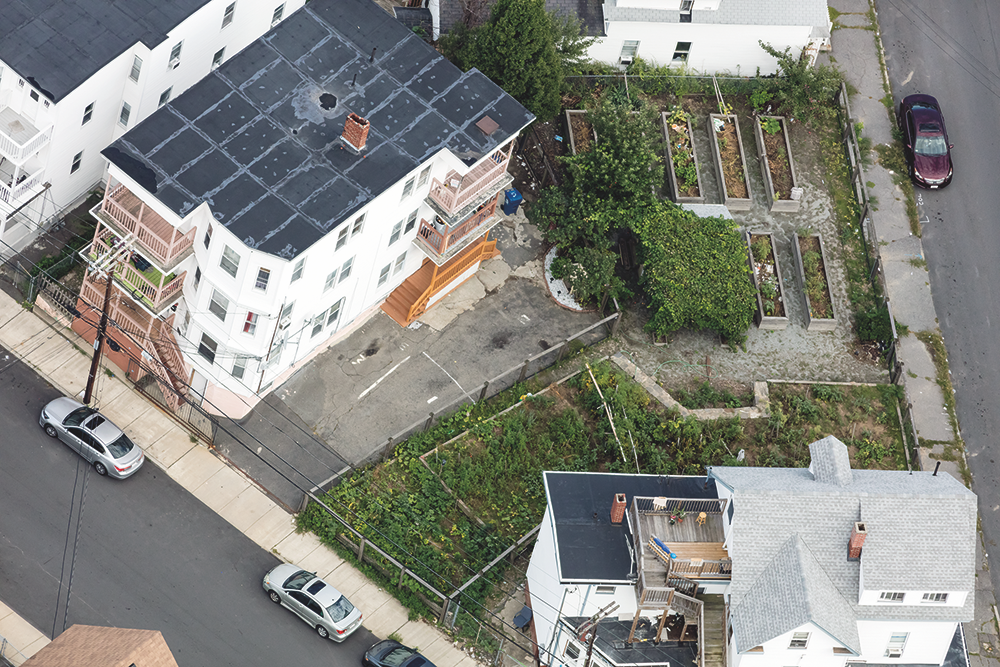 The city of Lawrence, Massachusetts, helped establish the Cross and Cedar Street Garden in 2011. The garden, which is tended by local residents, occupies two vacant lots where dilapidated housing had been torn down. Raised beds help protect against the hazards of contaminated soil. Credit: Alex MacLean. 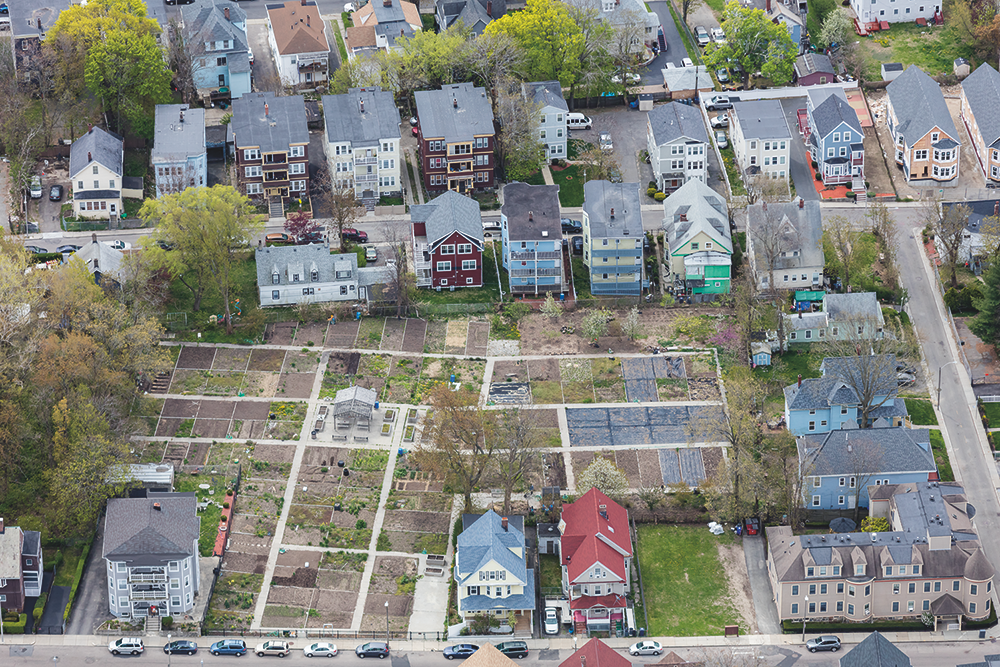 The Nightingale Community Garden in Dorchester, Massachusetts, owned by statewide conservation organization The Trustees, is part of a citywide initiative to increase access to local produce, and to make community gardens a prominent feature of unbuilt urban spaces. Credit: Alex MacLean. 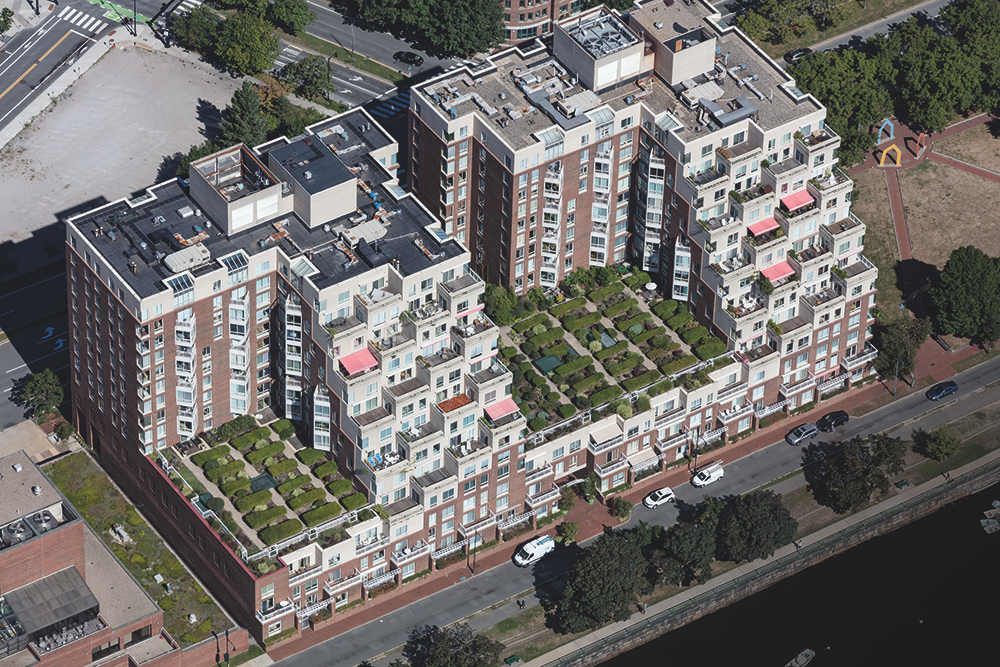 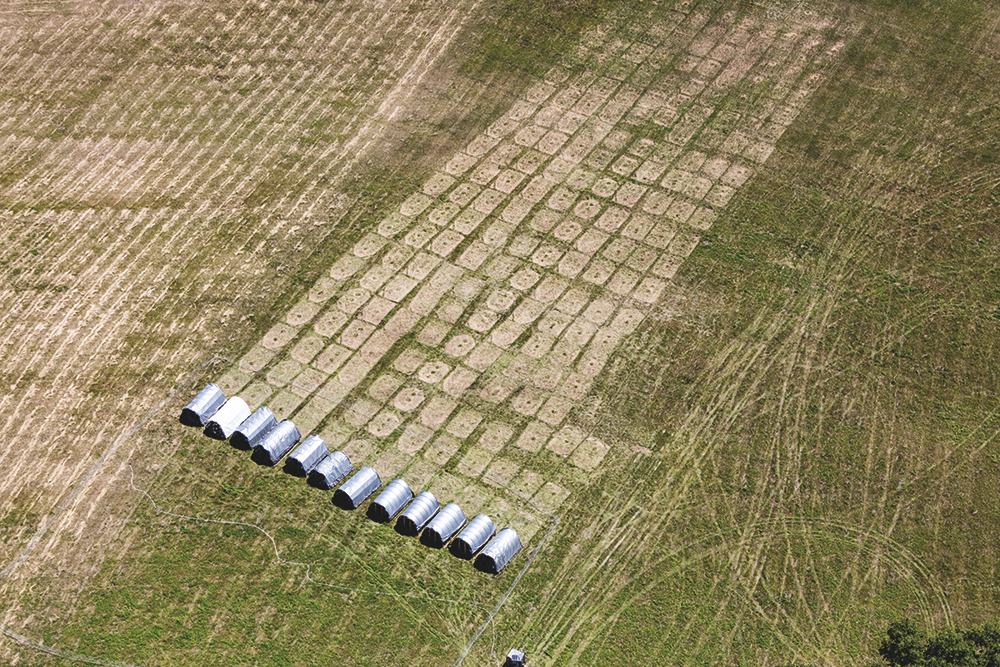 Chicken tractors and containment pens are moved each day at Codman Community Farms in Lincoln, Massachusetts, one of the sustainable practices that goes into producing 800 to 1200 eggs per week. Located 15 miles northwest of Boston and dating back to 1754, the farm sits on 18 acres. An additional 120 acres of fields and pastures scattered throughout the town provide hay for livestock and open spaces for those living in the surrounding area. Credit: Alex MacLean. 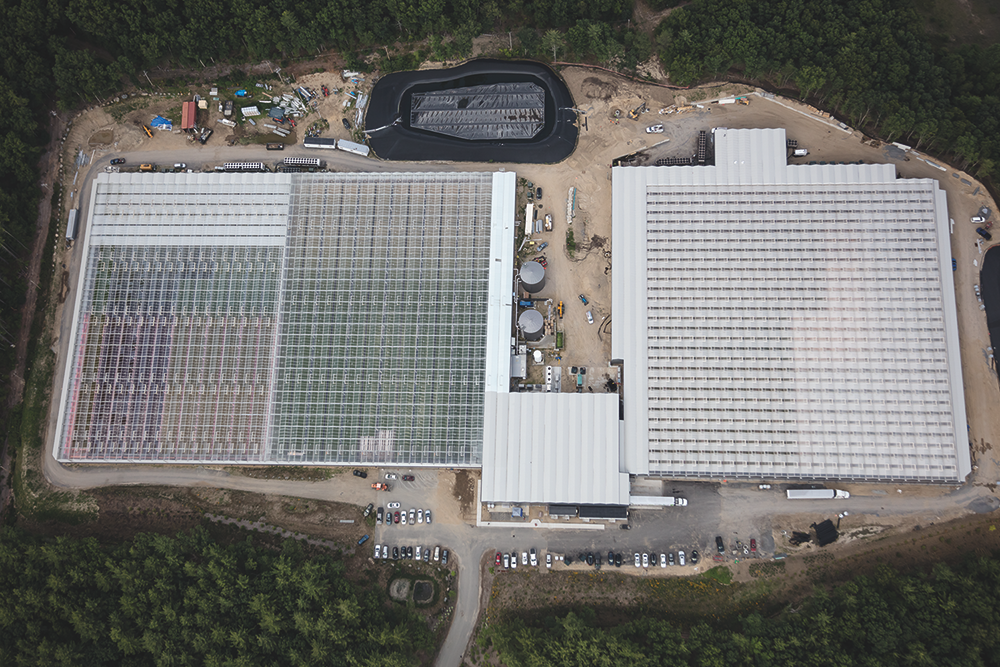 Over 95 percent of greens consumed on the East Coast come from California and Arizona, often spending over a week in transit. Little Leaf Farms is working to disrupt reliance on West Coast produce through year-round hydroponic growing in a 10-acre greenhouse in Devens, Massachusetts, 40 miles west of Boston. The growing process is entirely automated; greens are planted and harvested without touching human hands. The company’s success thus far has brought in $90 million in debt and equity financing to expand operations down the East Coast, beginning in Pennsylvania and North Carolina. Credit: Alex MacLean. 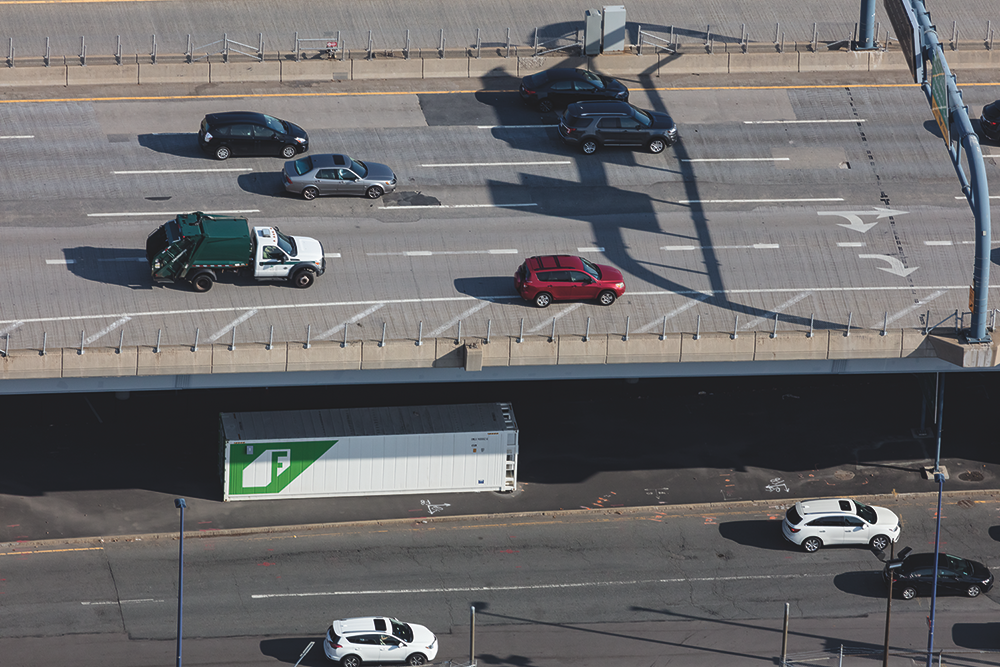 Freight Farms manufactures vertical hydroponic greenhouses inside 40-foot shipping containers. Equipped with precise climate control and optimized lighting for select plants, the containers can yield up to two acres of conventionally grown produce in 320 square feet. The mobile greenhouses can be placed anywhere, such as beneath highway underpasses or adjacent to schools. Credit: Alex MacLean. 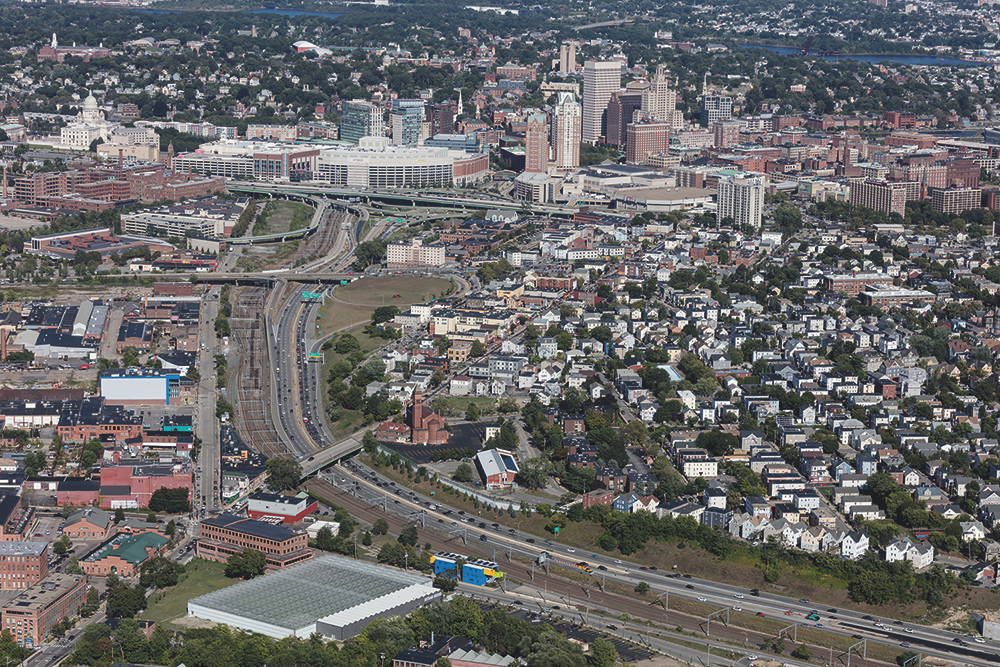 Built on what was once a contaminated brownfield site in Providence, Rhode Island, Gotham Greens—the white structure at bottom left of image—provides New England with year-round hydroponically grown greens and herbs. The greenhouse is powered by renewable electricity and uses 95 percent less water and 97 percent less land than conventional agriculture. Credit: Alex MacLean. 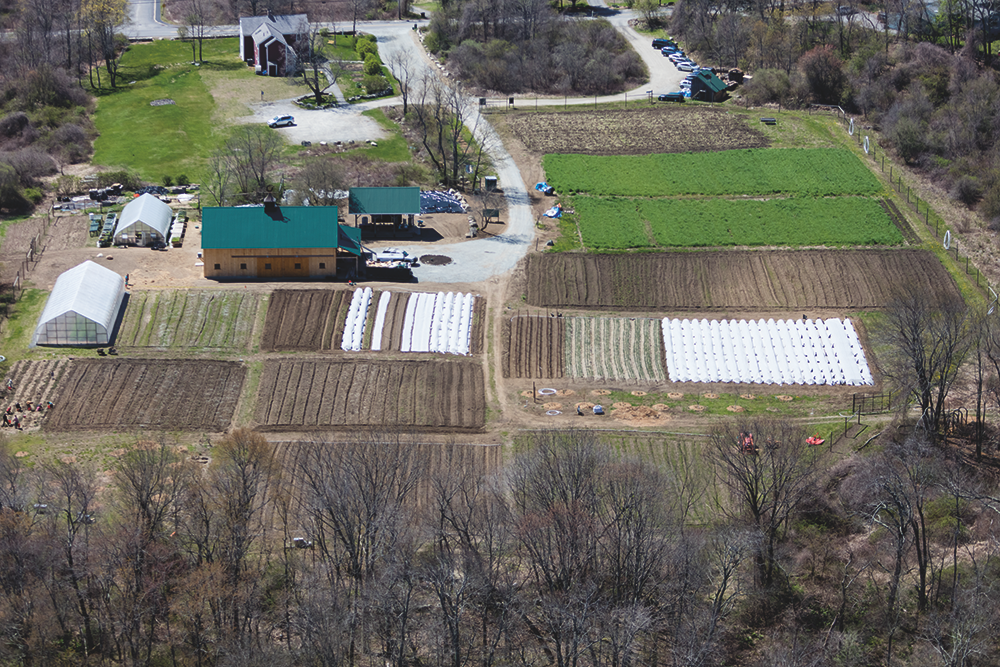 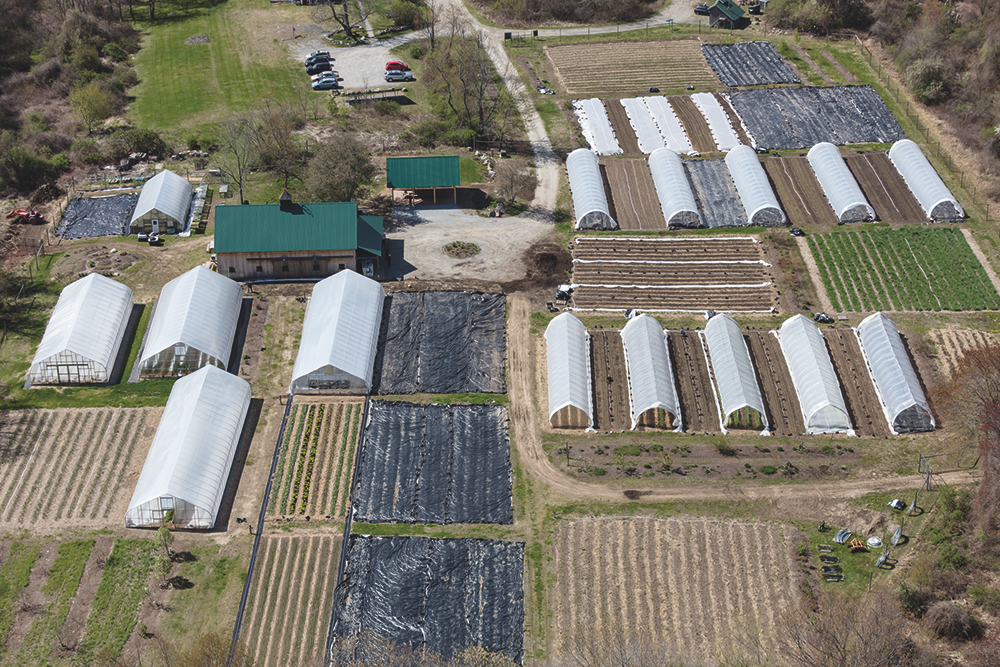 This photograph, taken in 2020, shows the intensification of production at Gaining Ground Farm in Concord, Massachusetts. Gaining Ground, which grows produce for Boston-area shelters and food pantries, more than doubled the amount of food it grew and donated between 2016 and 2020. Credit: Alex MacLean. 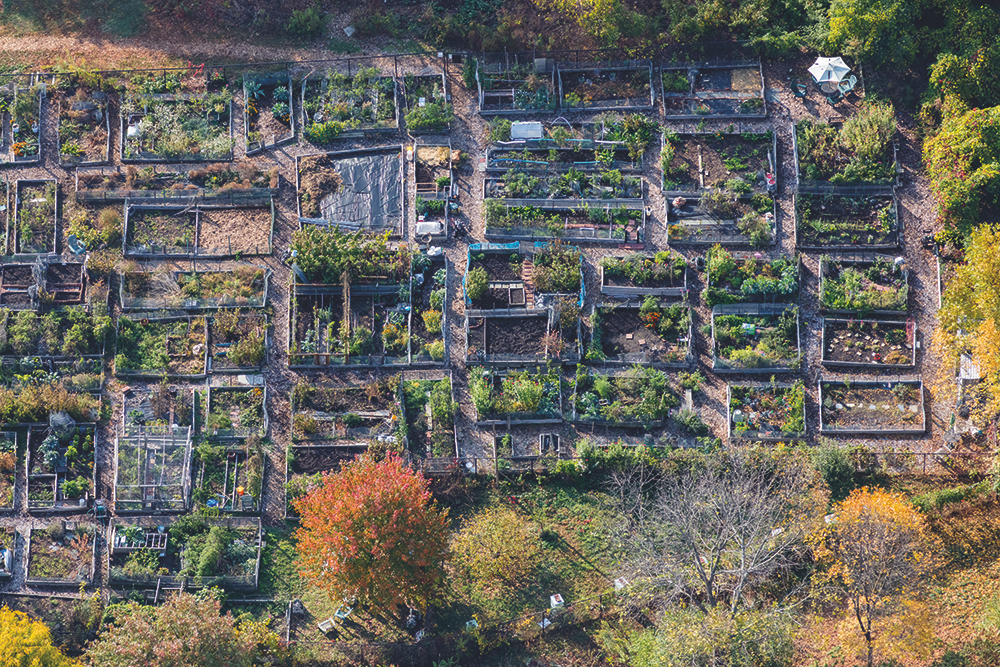 This community garden in Allston-Brighton, Massachusetts, is on land owned by the state Department of Conservation and Recreation. The mid-October foliage foretells the end of the growing season and the onset of winter. Credit: Alex MacLean.

Alex MacLean is a pilot and internationally exhibited photographer whose work has appeared in Land Lines and the Lincoln Institute book Visualizing Density. He specializes in documenting changes to the land brought about by human intervention and natural processes.

Lead Image: Boston’s community gardens have created a stronger sense of place within city neighborhoods. The Worcester Street Community Garden in Boston’s South End is one of 56 community gardens owned by The Trustees. Managed by volunteers, the Worcester Street garden has more than 130 plots available to Boston residents on a first-come, first-served basis. Credit: Alex MacLean.