In Fresno, California’s fifth-largest city, someone who has owned a median-priced home for 11 years—the average length of ownership there—paid less than $2,000 in property taxes last year, more than $1,400 less than the new owner of an identical home, who paid more than $3,400. This disparity between the tax burden for new and longtime homeowners grew by more than 14 percent last year alone in Fresno, recently named the nation’s hottest housing market by the Los Angeles Times for its fast-rising real estate values. This tax disparity has more than tripled in Fresno over the past five years, according to the annual 50-State Property Tax Comparison Study by the Lincoln Institute of Land Policy and the Minnesota Center for Fiscal Excellence.

Fresno is one of 29 large cities included in the report where assessment limits cap annual growth in the assessed value of individual properties, a policy that favors longtime homeowners. The faster real estate prices rise, the more assessment limits shift the tax burden to newer homeowners, whose properties are assessed closer to the market value. Overall, in the 29 cities with these assessment limits, new homeowners paid 30 percent more in taxes last year than those who have owned their homes for the average duration within their city. That difference was more than double the 14 percent disparity in the same cities five years earlier.

In addition to providing data on effective tax rates, the study explains why property taxes vary so widely from place to place. The extent to which a city relies on the property tax is chief among the reasons. Cities with high local sales or income taxes do not need to raise as much revenue from the property tax and thus have lower property tax rates on average. For example, Bridgeport, Connecticut, has one of the highest effective tax rates on the median-valued home, while Birmingham, Alabama, has one of the lowest. But the average Birmingham resident pays 39 percent more in total local taxes than the average resident of Bridgeport when accounting for sales, income, and other local taxes.

Property values are the other crucial factor explaining differences in tax rates. Cities with low property values need to impose a higher tax rate to raise the same revenue as cities with high property values. For example, the effective tax rate on the typical home in Detroit, which has the lowest median home value in the study, is three times higher than in San Francisco, which has the highest median home value, after accounting for assessment limits. In Detroit, raising $3,379 per home—the national average tax bill on a median-valued home—would require an effective tax rate 20 times higher than in San Francisco.

Among the largest cities in each state, the average effective tax rate on a median-valued home was 1.4 percent in 2020, with wide variation across cities. Four cities have effective tax rates that are at least double the national average—Aurora (IL), Bridgeport (CT), Newark (NJ), and Detroit. Conversely, eight cities have tax rates of half of the average or less—Honolulu, Charleston (SC), Boston, Denver, Charleston (WV), Cheyenne (WY), Salt Lake City, and Birmingham (AL). 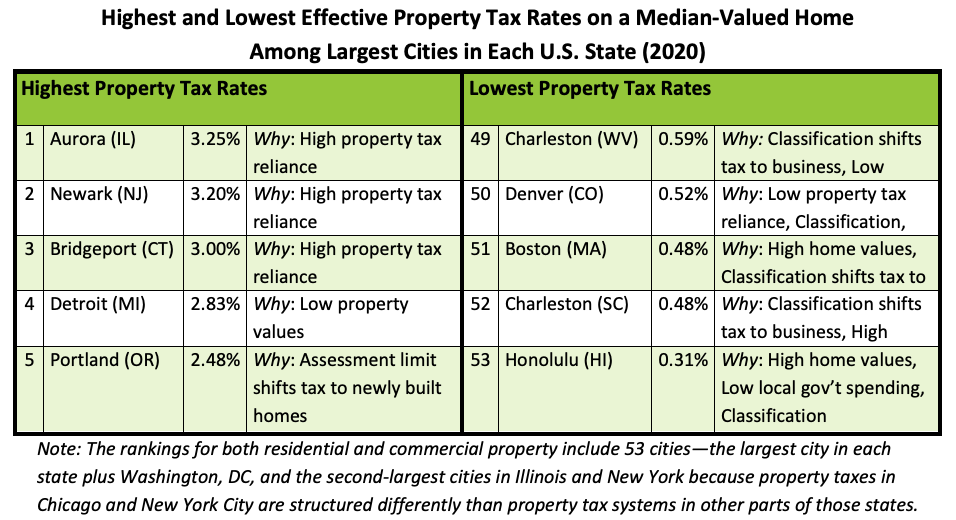 Commercial property tax rates on office buildings and similar properties also vary significantly across cities. The effective tax rate on a $1 million commercial property is 2 percent, on average, across the largest cities in each state. The highest rates are in Detroit and Chicago, where rates are more than twice the average for this group of cities. Rates are less than half of that average in Cheyenne (WY), Seattle, and Charlotte. 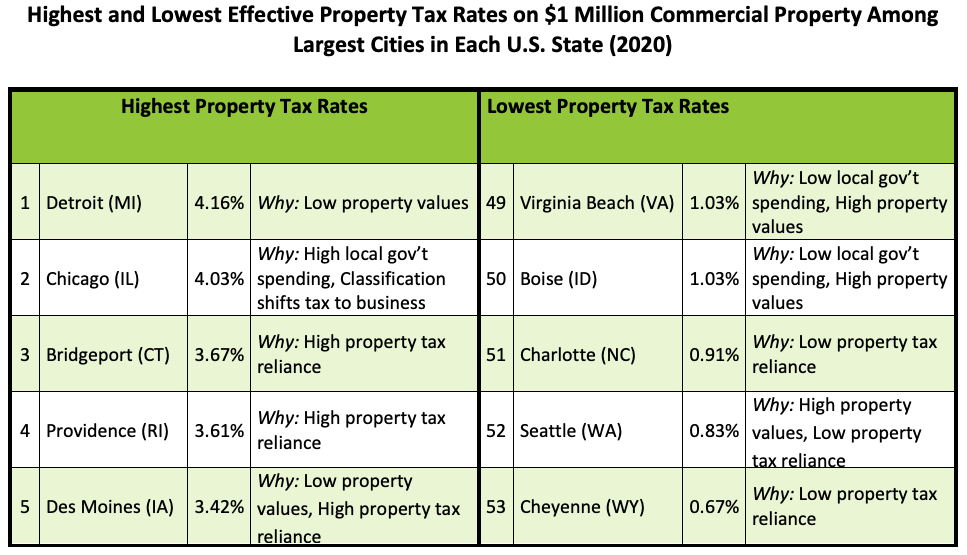 Will Jason is director of communications at the Lincoln Institute of Land Policy.