The Pandemic, The Property Tax, and Municipal Recovery
By Liz Farmer, June 16, 2020

Local governments are still learning what the COVID-19 crisis will mean for their revenues over the next year. In large part, the answer will depend on what part of the economy they rely on for their tax revenue.

Some are already grappling with grim news. In Kansas City, Missouri, council members are looking at budget cuts totalling $300 million over the next six years. In March, they approved a $1.7 billion budget that included a hiring freeze and reductions in travel, but noted they’ll likely have to face more difficult choices in the months ahead.

Meanwhile, more than 1,400 miles away in Boston, Mayor Marty Walsh has proposed a $3.65 billion budget for the next fiscal year. It’s a 4.4 percent spending boost over the current year that includes increased funding for education, housing, and public health.

It’s not that Boston is facing a vastly lower public health or economic impact from the COVID-19 virus. In fact, it has had notably more COVID-19 cases than Kansas City, both in number and as a share of the population. Instead, the difference lies in where each city gets most of its tax revenue.

While the full impacts of the COVID-19 crisis on municipal revenues over the next few years are still unknown, what is clear is that we have been thrust into an economic recession that is unmatched in the modern era. During economic downturns, the property tax is a relatively stable source of revenue. The average city relies on the property tax for about one-quarter of general fund revenue, according to the Lincoln Institute’s Fiscally Standardized Cities, or FiSC, database. (Counties, by comparison, rely on the property tax for about one-third of their general fund revenue, according to the National Association of Counties.) 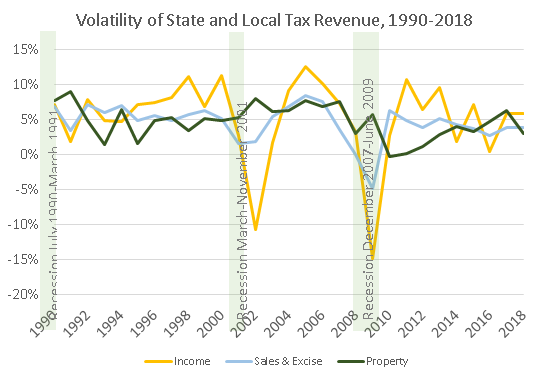 “During most post-World War II recessions, property tax revenues have not declined,” says the Lincoln Institute of Land Policy’s Adam Langley, who manages the FiSC database. This is largely because even if a downturn is prolonged enough to affect local home values, the lag time between real estate market changes and property valuations gives governments time to raise rates to make up the anticipated difference in revenue. “The notable exception is the Great Recession,” said Langley, associate director of U.S. and Canadian programs, “and that was a unique circumstance because of the historic housing bust.”

Kansas City Budget Director Scott Huizenga noted that the city’s rainy day reserves are at a record high — equivalent to nearly 20 percent of general fund spending. That’s a far better position than Kansas City was in entering the Great Recession, when it had about 5 percent of annual spending in reserves, according to Pew Trusts. Huizenga notes that forecasting the revenue impacts of the current crisis is a challenge.

“Like most places, we have a two-month delay between the activity on the ground and the revenue impact,” Huizenga said during an interview in late May. “It will be at least a few weeks more before we learn the totality of what happened in April, much less what’s going to happen a year from now.”

Even cities that rely on the relative stability of the property tax are by no means immune from the uncertainty of the moment. Cities across the country are struggling to balance their need for property tax revenue with the potential need to grant deferrals or other targeted tax relief to property owners who may not be able to pay their bills.

For example, California Gov. Gavin Newsom signed an executive order waiving penalties through May 6, 2021 for late property tax payments made by those affected by COVID-19. But the California Association of County Treasurers and Tax Collectors then urged those who could pay to do so on time, noting that property taxes “directly fund education, health care, hospitals, welfare services, fire protection, and homelessness efforts, to name a few.” At this point, most localities haven’t significantly pushed back property tax bill deadlines, even if their state has allowed it.

In many places, existing property tax relief programs are available, and when effectively targeted can provide critical relief to the neediest households without unduly diminishing local revenues. These “circuit breakers” provide relief to households once their property taxes exceed a specified percentage of income, so people with a sudden drop in earnings could qualify for substantial relief. Circuit breakers are available in 33 states and the District of Columbia, although many of those states use formulas that will not provide adequate relief to those with the heaviest tax burdens.

Conflicting predictions about the future of commercial real estate have also added uncertainty to the municipal property tax picture. With social distancing restrictions and other public health precautions decimating the retail and hospitality sector, several major retailers have declared bankruptcy and businesses of all sizes are struggling to stay open.

“Shopping malls and property used in the hospitality and entertainment industry may very well be facing a significant loss in value, particularly over the next couple of years.” said Lincoln Institute Resident Fellow Daphne Kenyon. “This would disproportionately affect those cities that are tourist or shopping meccas.” Reliance on commercial property tax revenue varies significantly from state to state, as illustrated by the Significant Features of the Property Tax database.

The future of commercial office space is also in question; it is expected that many employers will allow full or partial telecommuting after COVID-19 restrictions are lifted, and one University of Chicago study found that 34 percent of jobs in the United States could be performed remotely. Already, major tech companies like Facebook and Twitter have announced plans to let employees work from home permanently.

Some experts are predicting a sort of real estate “swap,” which could see businesses seeking new property outside of downtowns and former downtown office buildings converted to housing. Still others suggest that the smaller space requirements of housing fewer workers will be offset by the need to accommodate social distancing. These and other issues raise questions about the future of real estate in large cities—and therefore the value of downtown real estate properties and the tax revenue they generate.

Hilltop Securities’ Tom Kozlik said there were somewhat similar concerns that firms wouldn’t want to return to downtown Manhattan after the 9/11 terrorist attacks.

“I remember there were some people hesitant to fly or go up in skyscrapers, but that seemed to pass in a pretty short amount of time,” said Kozlik, head of municipal credit for the firm. “This time it’s a little different—I don’t think people have their heads around what the entire public health threat is right now. And that's one of things policymakers are trying to figure out.”

Despite the many uncertainties facing municipal governments, Kenyon says the relative stability of the property tax is not in doubt. “Property taxes are the most stable of the big three taxes—income, sales, and property. For local governments that depend heavily on the property tax, and for the citizens who benefit from the services that property taxes support, this is a ray of light in a very tumultuous time.”

In municipalities across the country, including Kansas City, Missouri, leaders are grappling with the fiscal impacts of COVID-19. The impacts will vary depending on the relative sources of tax revenue in each place. Credit: Kate Brown via Flickr CC BY 2.0.

During most post-World War II recessions, property tax revenues have not declined, largely because the lag time between real estate market changes and property valuations gives governments time to make up the anticipated difference in revenue. The notable exception was the Great Recession. Credit: Lincoln Institute of Land Policy.