Since 2015, the Coachella Valley region of Southern California, home to over 400,000 year-round residents, has produced an average of only 38 new affordable housing units per year. The lag in construction has forced thousands of rent-burdened households to choose between housing and other basic needs. To address the shortage, a public-private partnership has identified an ambitious goal: creating 2,000 new affordable units in the next two years and almost 10,000 by 2028.

More than 50 private, public, and nonprofit partners have formed a cross-sector network spearheaded by the organization Lift to Rise to address housing shortages at scale. The group released an action plan in January that calls for a regional approach to housing development, emphasizing the need for coordination between the region’s nine cities and unincorporated areas of Eastern Riverside County. The plan, developed with support from the Center for Community Investment (CCI), also seeks to identify and unlock new forms of capital that will help the area meet its goals.

This arid region, which sits 90 miles east of Los Angeles and stretches from the Salton Sea to the San Gorgonio Pass, is home to both resort cities, like Palm Springs and La Quinta, and agricultural areas in the Eastern Coachella Valley populated by mobile home parks or  “Polanco Parks” that mainly house the Valley’s many agricultural workers. Widely known for an annual music festival that draws tens of thousands of visitors, high-profile performers, and a glut of media attention, the area experiences a daily reality far removed from that spectacle: 55 percent of households are rent burdened, or spend over 30 percent of their income on housing, and have little left to spend on childcare, utilities, and healthy food. This problem has been exacerbated by a lack of subsidized housing and the 2011 dissolution of redevelopment agencies statewide on the tails of a budget crisis.

In 2014, community-based actors including FIND Food Bank, United Way of the Desert, the Regional Access Project Foundation, the Desert Healthcare District, and the Riverside County Economic Development Agency started talking about how to improve quality of life for residents of the Coachella Valley. The conversations culminated in the creation of Lift to Rise, with founders spending 18 months engaged in extensive community listening sessions to determine shared priorities across a diverse and often siloed region. They set out to understand the region’s existing housing supply and distribution and to determine what new development was needed, where it was needed, and how to pay for it, talking with developers, cities, and other partners. These conversations revealed significant gaps in funding and communication, and an opportunity for collaboration.

“Each city had their own housing projects they were working on, each developer had their projects,” said Michael Walsh, deputy director at the Housing Authority of the County of Riverside. “There wasn’t a single place where one group could go and look at the whole picture or have a clear idea of what barriers projects were facing moving forward.”

From the beginning, Lift to Rise prioritized increasing available housing. The group knew that “we were never going to be able to reduce residents’ need to access stable housing if we didn’t increase supply,” says Heather Vaikona, president and chief executive officer of the organization. After identifying 31 projectsin the works that would provide 2,211 housing units, the group looked closely at the related finances. They found total development costs of $750 million and a $100 to $125 million finance gap, and began to explore the potential of regional investment models that could secure sufficient funding for a diverse range of projects and housing types.

“We have a number of eastern Coachella Valley mobile home parks owned by largely mom and pop type operators that really don’t have the access to capital at the same level as institutional investment partners,” Walsh said. “Each one of those projects is not going to be able to raise money [as a] standalone, but treating them as a group and operating on the regional level, you get better access to capital to fund infrastructure that will improve the quality of the units. You can start getting to a level of scale that will be more attractive to the state and financial institutions to deploy capital.”

In late 2017, looking to move beyond its project-by-project approach to affordability, the Coachella Valley team applied to participate in CCI’s Connect Capital program. Connect Capital provides multisector, place-based teams working on affordable housing, climate equity, and other community-identified challenges with customized coaching, facilitated peer learning, and a grant to fund a local staff position dedicated to advancing each team’s work. As part of its engagement with Lift to Rise over the past two years, CCI helped to develop the Lift to Rise action plan, which is structured around CCI’s Capital Absorption Framework, a tool that helps communities access the investments they need to create safe and healthy neighborhoods. The Capital Absorption Framework has been used in other places such as San Francisco, where a multisector discussion about affordable housing led to the discovery that unused BART-owned land could house up to 30,000 new units.

“The action plan identifies building and sustaining a pipeline of community-valued projects as a top priority. By creating a pipeline of projects, the team can move towards a collaborative process that simultaneously maximizes available resources and attracts more resources. In so doing, the team is moving the region from a scarcity model to one of possibility,” said Omar Carrillo Tinajero, assistant director of programs for Connect Capital at CCI. “The pipeline is where community investment becomes much more than the sum of its parts.”

Soon, cities in the valley will report quarterly on the inventory of their current projects, available public lands and other development sites, and at-risk units that could be preserved. This approach will help the cross-sector team identify opportunities for investment, potential deals, and the type of intervention—whether policy, financing, or investment—each project requires, according to Carrillo Tinajero.

Araceli Palafox, assistant director of research and policy at Lift to Rise, added that a regularly updated inventory will allow partners to more intentionally couple housing with other services like childcare and pinpoint geographic areas currently lacking housing options. 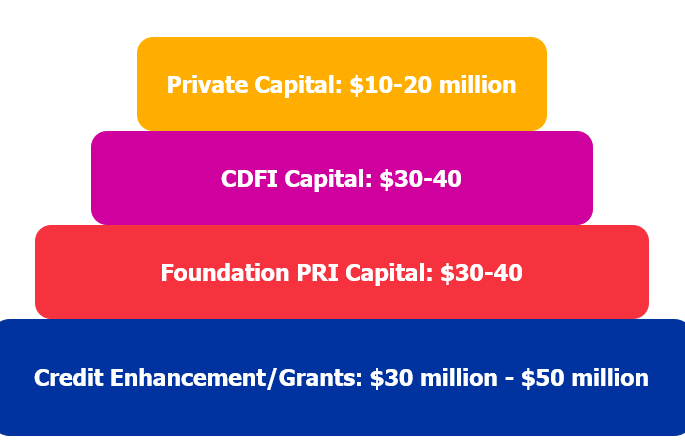 At the center of the group’s investment approach is a regional housing fund: the Coachella Valley Housing Catalyst Fund. Set to launch in a few months, the fund will start by seeking to attract $100 million to $150 million in investments in the form of credit enhancements and grants, program related investments (PRIs) from foundations, capital from community development finance institutions (CDFIs), and private capital.

In theory, a base of upfront money will help to attract more risk-averse capital and, layered with city and state funds and housing vouchers, will offer more comprehensive coverage than any of the individual elements could by themselves.

“Combining different sources of funding—private capital, foundation impact investment and grants, and public subsidy—can help overcome the limitations of each,” a 2019 report by the Federal Reserve Bank of San Francisco explains. “Funds can help kickstart affordable housing preservation and development by closing the gap in early stage funding.”

The model is getting attention at the state level. Fiona Ma, California State Treasurer, recently lauded the efforts of Lift to Rise on Twitter: “I’ve been looking for a solution to bring all funding streams together to better leverage money to build more housing. The Coachella Valley Housing Catalyst Fund is a great way ‘to bake a cake, and stop fighting for crumbs.’” The state is exploring possibilities to leverage its own resources through the fund structure.

The fund will be run by three national CDFIs, with the fund manager housed at the Lift to Rise office.

Among the action plan’s policy goals are increasing density, reducing development and impact fees, and providing more opportunities for by-right development, streamlining, and expedited processing. Some of this won’t be possible without changes to local policies, and Vaikona said some of the region’s communities are more open-minded about amendments to the zoning code than others.

“You can imagine that these conversations around impact fees, especially in the cities that have been more amenable, are already on the radar and moving through some jurisdictions, whereas more traditionally politically conservative communities are more resistant,” Vaikona said. “If we want to be able to produce [a specific] amount of housing by a certain time, we can agree on the outcome, but the pathways or activities that cities can do, such as changing a code that lends itself to more favorable zoning, can vary depending on context.”

Lift to Rise is pursuing its housing agenda in conjunction with a number of economic development strategies. Responding to the high costs of utilities and a high proportion of residents without bank accounts, the organization is piloting a utility discount program and lending circles in partnership with Mission Asset Fund.

At the center of both the organization’s housing and economic development agendas is a focus on fostering unprecedented collaboration as a way to get results at the regional level.

“Lift to Rise got its name from an East Valley resident who came to the Valley because he believed that when the sun rises, it rises for everyone. This is both the vision and core belief that drives our work,” Palafox said.  “You have half a million people all with really different experiences. We are figuring out how to ensure that resident voice isn’t just informing the work, but driving it. There are not a lot of places that are working at the scale of geography we are working at. We don’t have it right or perfect, but the intense collaboration resulting from this project bodes well. Our highest aspiration is realizing residents’ vision for the future.”

Emma Zehner is communications and publications editor at the Lincoln Institute of Land Policy.

Photographs (in order of appearance):

The housing fund will start by seeking to attract $100 million to $150 million in investments in the form of credit enhancements and grants, program related investments from foundations, capital from community development finance institutions, and private capital. Credit: Lift to Rise.