What It Means to Design with Nature Now

Reflections on the Legacy of Ian McHarg
February 10, 2020

To mark the fiftieth anniversary of Ian McHarg’s Design with Nature, the Lincoln Institute of Land Policy collaborated with the University of Pennsylvania's Stuart Weitzman School of Design to publish Design with Nature Now, showcasing some of the most advanced ecological design projects in the world today. We asked some of the book's contributors to weigh in on Ian McHarg’s lasting influence and what will make it possible to design with nature at scale today. 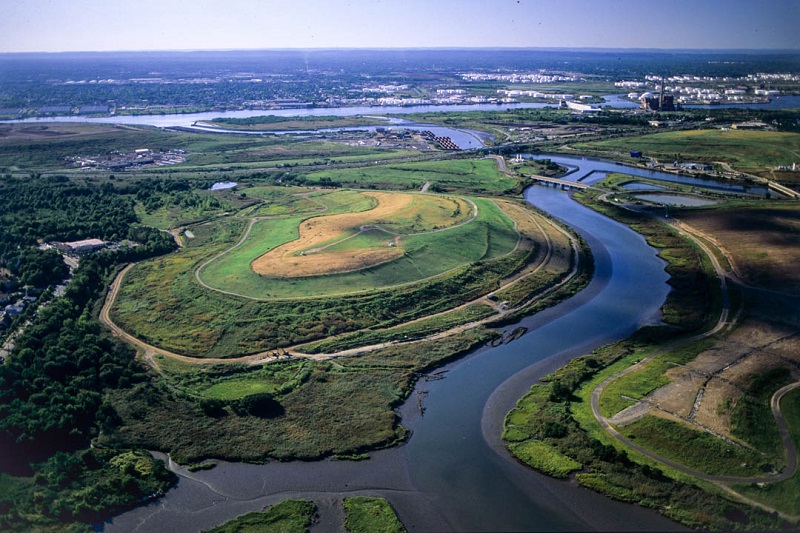 “I think we need to get serious about regenerative design. Regeneration involves recovery and rebuilding, yes, but also restoration, renewal, and revitalization. Regeneration improves ecosystems by contributing to ecosystem services rather than depleting them. Several of the Design With Nature Now projects illustrate this. For instance, Freshkills Park is more about regeneration than resiliency as it is transforming a huge landfill into a new, healthy landscape.”

— Frederick Steiner, Dean and Paley Professor at the University of Pennsylvania’s Stuart Weitzman School of Design; Volume Editor and Author of “Green the Earth, Restore the Earth, Heal the Earth,” Design with Nature Now

Above: After operating as a garbage dump for more than 50 years, Staten Island’s FreshKills Landfill was transformed into a public park starting in the early 2010s. The grasslands park, which will stretch over 2,000 acres once it is completed in 2036, will offer spaces for athletics, education, and recreation. 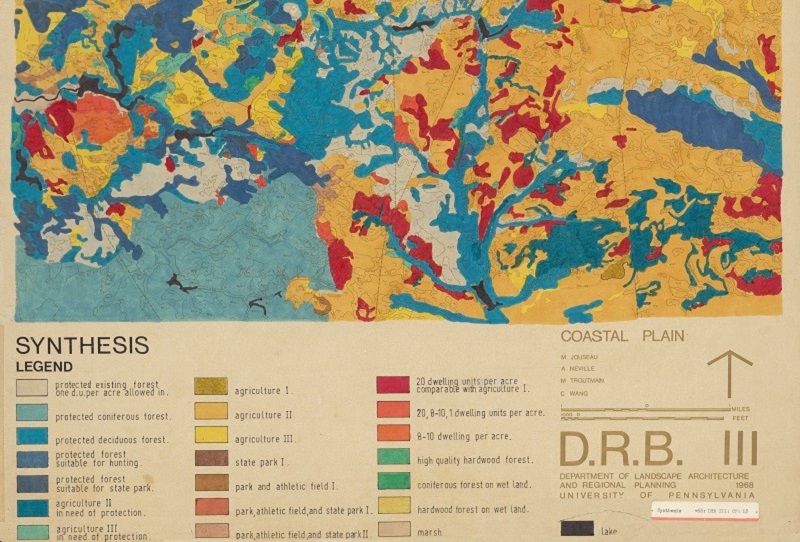 “We need an expansion of McHarg’s methods . . . creatively reimagined to accommodate more complexity and diversity and to design—as much as that is possible—a planetary future with both nature, and human nature, in mind.”

— Andrew Revkin, Director of Columbia University’s Earth Institute Initiative on Communication and Sustainability; Author of “Design as a Quest, Not a Task,” Design with Nature Now

Above: McHarg’s landscape suitability analysis maps, which are widely considered the predicate for Geographic Information Systems (GIS), showed where to locate development and where to leave nature undisturbed. 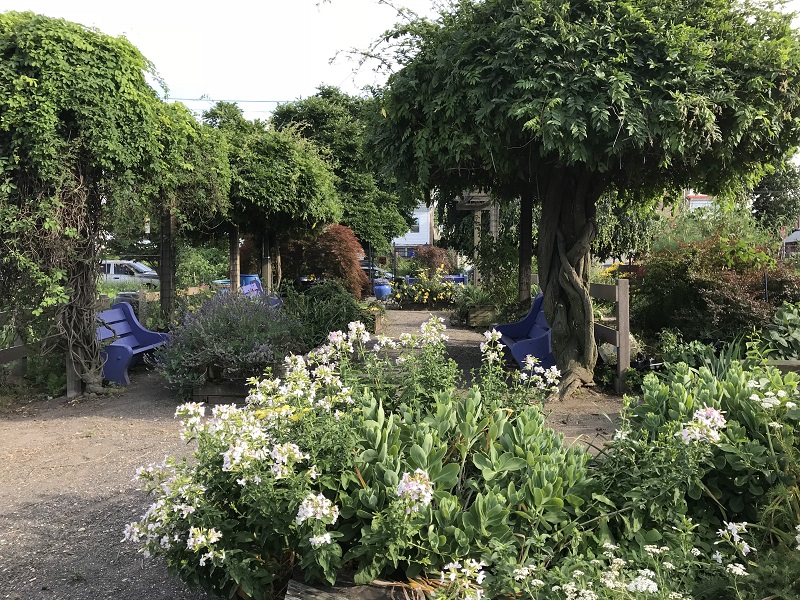 “I knew nothing about landscape architecture until I read Ian McHarg’s description of the field in the brochure of the Graduate School of Fine Arts at the University of Pennsylvania in 1969. McHarg’s text was a call to action. It spoke directly to me, offering the opportunity to join a profession that would give scope to all my disparate interests: landscape, environment, history, art, photography, social action. I decided to switch from Penn’s doctoral program in art history to landscape architecture.”

Above: Since 1987, Spirn has directed the West Philadelphia Landscape Project, which aims to improve regional water quality and rebuild healthy neighborhoods through environmental and design education. Over the years, staff and residents have transformed vacant urban lots, built community gardens, proposed green infrastructure elements, and developed school curricula about the region’s history. The above photo shows Aspen Farms in June 2018. 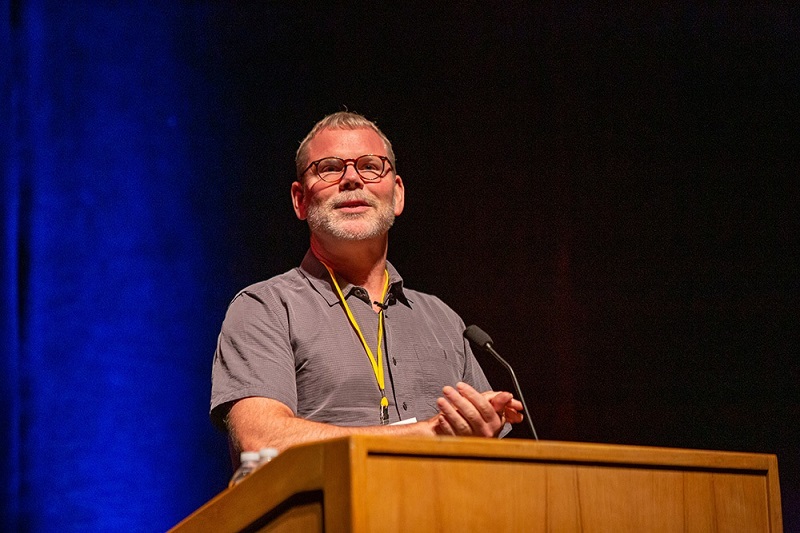 “For climate change adaptation, design with nature is already increasingly in demand, in the form of ‘nature-based solutions’ and green infrastructure. To scale these up, one key element is the integration of these solutions into infrastructure standards, such as those guiding urban development and road construction. On the other hand, I fear that efforts to mitigate climate change through green infrastructure, including green roofs and tree planting to store emissions of carbon from fossil fuels, are no better than a fig leaf hiding the much harder ultimate solution to climate change: the need to transition from carbon emitting to clean energy systems.”

— Erle Ellis, Professor of Geography and Environmental Systems at the University of Maryland, Baltimore County; Author of “Nature as Designer: Emancipating Nonhuman Ecologies in an Increasingly Human World,” Design with Nature Now

Above: Ellis was a keynote speaker at the Design with Nature Now conference hosted by the Ian L. McHarg Center for Urbanism and Ecology in June 2019. 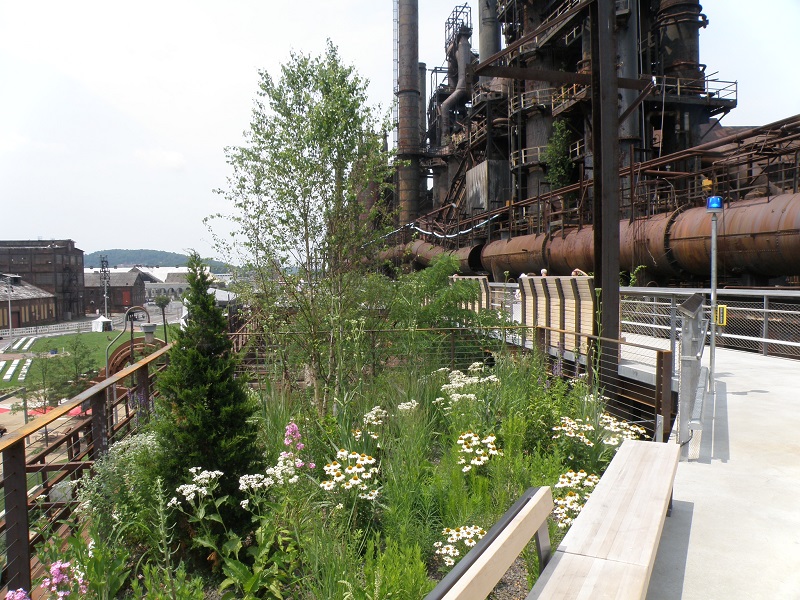 “McHarg promoted the understanding of natural systems to avoid damaging the resources humans are dependent upon. In McHarg’s time, he had to understand what was in place and what would be there in the foreseeable future if we learned how to manage it. But now, what is there is moving and changing, so it is even more imperative to try to understand natural systems and their behavior.”

Above: Bunster-Ossa led the development of the Bethlehem SteelStacks Arts + Cultural Campus in Bethlehem, Pennsylvania. The project, which transformed the former Bethlehem Steel Plant into an arts, culture, and community space, was awarded the Urban Land Institute’s Global Award of Excellence and Rudy Bruner Award. 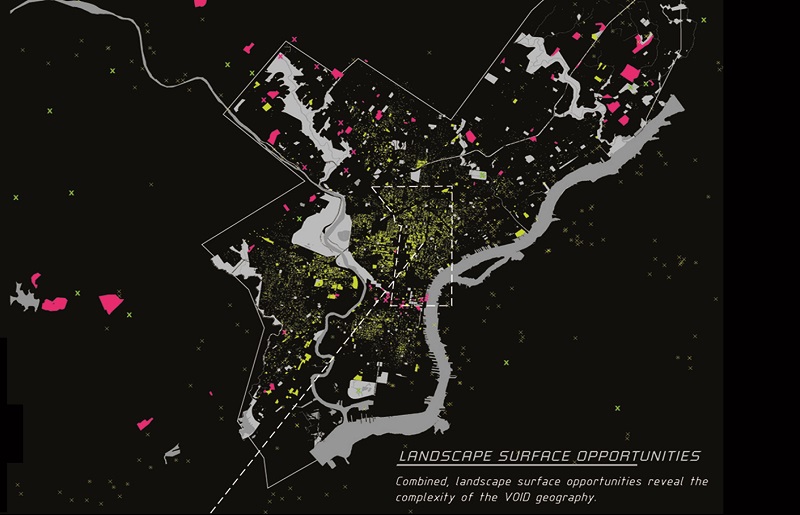 “Our challenge, if we are to build something greater out of the detritus that escaped McHarg’s grasp, is to intelligently interpret the systemic thinking brought forth by him to generations of landscape architects and regional planners during the later twentieth century. His model must be implemented both to protect pre-development land, and post-development waste.”

Above: As part of the work at MIT’s P-REX lab, Berger, Berger mapped Philadelphia’s “urban void geography.” The project identified hundreds of small vacant lots to determine how they might be combined into bigger lots in a landscape reuse program. The above map shows vacant parcels, retail areas, toxic release sites, and parks. 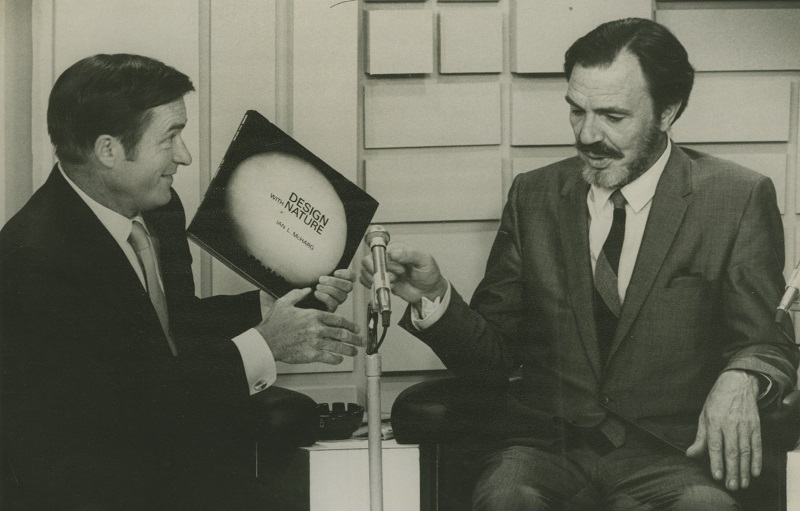 “I think the thing that makes McHarg’s ideas still so important is that they were not just McHarg’s ideas. The power of his work came, in many ways, from his ability to consistently convene a robust transdisciplinary conversation. His ideas were generated through the deconstruction of silos within and outside of academia.”

— Jonah Susskind, lecturer in MIT’s Department of Urban Studies and Planning and researcher at the Norman B. Leventhal Center for Advanced Urbanism; Coauthor of “The Planetary Optic and Finding the Real Ground,” Design with Nature Now

Above: McHarg on the set of The Mike Douglas Show in 1969 discussing his book. 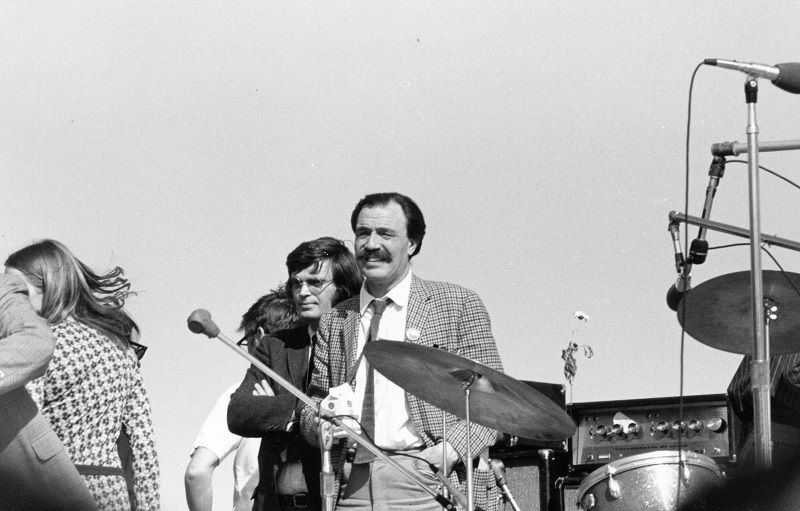 “In less than 20 years, McHarg … established the place of design in the awakening environmental consciousness. The pessimism (or was it realism?) in his remarks on the Earth Day stage was a call to action, an expression of outrage at the current state of affairs. People were listening and taking action; the environment had become a great unifying force.”

— William Whitaker, Curator and Collections Manager for the Architectural Archives at the University of Pennsylvania’s Stuart Weitzman School of Design; Author of “Why Do I Have to Be the Man to Bring You the Bad News,” Design with Nature Now

Above: McHarg in 1970 at Independence Mall during the first Earth Week, which was organized by University of Pennsylvania students and faculty.

Photographs (in order of appearance):