During the last two decades, the population of Fort Collins, Colorado, expanded from 100,000 to 170,000. According to the city’s newly adopted comprehensive plan, that total is expected to swell to 240,000 by 2040. As one of the fastest-growing cities in one of the fastest-growing states in the country, Fort Collins has identified priorities for managing its future that range from increasing affordable housing to embracing clean energy with the goal of becoming a carbon-neutral community. Among its action steps: reducing water consumption in new and existing buildings as part of an effort to “ensure that water is used wisely and our community is prepared for a changing climate.”

For Fort Collins and other communities across the West, the dual pressures of rapid development and climate change are making water an increasingly precious commodity—and an increasingly hot topic. As these communities are discovering, planning for the future requires thinking differently about how and where to build, how much water to allocate to new and existing developments, and how to balance water needs with available supply. To help facilitate this shift, the Sonoran Institute and Babbitt Center for Land and Water Policy have developed a multiday workshop that helps community leaders communicate, collaborate, and take action.

Growing Water Smart: Integrated Water and Land Use Planning Workshop, which won an award from the Colorado chapter of the American Planning Association in September 2019, helps land planners and water managers explore how land use and climatic trends impact water supply and demand at the state and local level. Building on the momentum created by the adoption of Colorado’s first statewide water plan in 2015, it also introduces communities to strategies and tools that can help them integrate water and land use planning to better adapt to change and uncertainty.

“When we heard about the Growing Water Smart program, we saw it as an opportunity to build better partnerships with the planning community,” said Fort Collins Water Conservation Program Manager Liesel Hans. “We knew we needed to be thinking about water and land use planning more strategically.”

The city put together a team that included a member of the city council, the head of its planning agency, and water resources managers including Hans. “We got people in a room who don’t typically get together,” Hans said.

Nurturing that kind of collaboration is exactly the point, said Jeremy Stapleton, director of Resilient Communities and Watersheds at the Sonoran Institute. “Water is one of our biggest challenges,” said Stapleton, who leads the Growing Water Smart program. “If we don’t get the water problem solved, there will be cascading effects. And solving it is going to take relationships and collaboration at a scale greater than we’ve seen.”

Ultimately, the goal of the program is to promote the idea of being “water smart from the start,” Stapleton said. Noting that water needs are often factored in after development projects receive approval, he said it benefits developers, residents, and community leaders alike to address this critical issue far earlier in the planning process: “It makes sense to make water-smart development the easiest type to build.”

To be selected for the workshop, potential participants must submit an application that describes their water supply and demand policies and practices, community awareness and acceptance of water-related forecasts and figures, issues they hope to address, and the current level of readiness and collaboration among various departments. They assemble a team of five to seven people who work closely with assigned facilitators during the three-day training. Members might include elected officials, water managers, representatives of municipal departments such as economic development or public works, and partners from the nonprofit and consulting sectors. The teams can hail from a single community, a county, or a multijurisdictional region. Their goal: to emerge with a one-year action plan.

“Each session is a progression,” said Faith Sternlieb, who manages Growing Water Smart for the Babbitt Center for Land and Water Policy and has facilitated community teams at several workshops. “Sometimes team members don’t know each other, even when they work in the same office. They start to share resources, data, and information, and explore how they can work together to achieve the goals identified in their application. They end up with an action plan for the year, and we encourage them to make it as specific as possible: if they’re going to have a meeting, who needs to be there, who will invite them, where and when will it be held, what is the goal, who is going to present, what are they going to present? It can be a hard and painful process, but you see collaboration and decision-making unfold before your eyes.”

Torie Jarvis, a lawyer and former rafting guide who works as a consultant for the Northwest Colorado Council of Governments (NWCCOG) Water Quality and Quantity Committee, has also been a facilitator at the workshop. “The great thing about the program is that the level of sophistication for jurisdictions varies widely, yet the format still works for everyone,” Jarvis said. She said participants have ranged from large cities with progressive approaches to water management to tiny towns on the Western Slope—a region that sends more than half of the water from some of its river basins across the Rocky Mountains to Front Range communities to the east—that are grappling with how to pay for basic infrastructure. “The model works no matter where you are in the process,” she said. 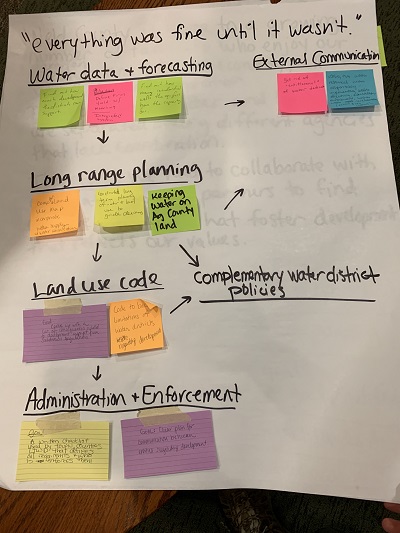 Fellow NWCCOG member Will Dujardin attended a workshop as a representative of the Crested Butte Town Council, taking his place on a team that included representatives from three municipalities within Gunnison County and from the county government. “We are all facing similar challenges, and the workshop helped us get to the same baseline,” said Dujardin, who was recently appointed mayor pro tem. Now back at their respective desks, the team members continue to connect regularly, and are considering follow-up activities including a local workshop and speaker series. “The fact that we’re still making headway shows how useful the program is,” Dujardin said. “Growing Water Smart acted as a catalyst for us.”

To make follow-up projects possible, Growing Water Smart invites participating communities to apply for up to $10,000 in technical assistance funds. The Fort Collins team took advantage of this opportunity to conduct meetings and planning exercises focused on how to assign water to new types of development such as mixed-use projects and townhouses.

Tangible outcomes in other communities have included formal Intergovernmental Agreements and MOUs, collaborations between agencies, and case studies, Stapleton said; a workbook produced by the Sonoran Institute also guides communities through the nuances of integrated water and land use planning.

During the three years since it began, the Growing Water Smart program—which has flourished with additional support from the Colorado Water Conservation Board and the Gates Family Foundation—has worked with more than 34 jurisdictions that are home to an estimated 50 percent of Colorado residents, Stapleton said. The program has just expanded to Arizona, tailoring its methods and messaging for a state that is facing similar water-related challenges, but in different political and geographic contexts.

Efforts are also underway to introduce the program in California. The Sacramento-based Local Government Commission (LGC)—a nonprofit, nonpartisan organization that convenes leaders with the goal of advancing policy and creating more livable communities—is partnering with the Sonoran Institute and Babbitt Center to adapt the curriculum for communities there. LGC’s program areas include a focus on the water-land nexus, and Growing Water Smart “meets all the needs we are identifying in California” in terms of education and capacity-building, said Danielle Dolan of LGC. After attending one of the Colorado workshops, Dolan began working with LGC colleague Atley Keller to draft a California-focused curriculum that reflects the fact that the natural and political landscape of the state is, as Keller puts it, “complicated and constantly changing.”

Dolan is now working with Stapleton to secure funding for a potential California pilot that would begin building the capacity of individuals and agencies to collaborate, which she says is critical in the face of development pressure, limited natural resources, and encroaching climate change. “Everyone is working frenetically in their own little bubbles without coordinating, and they are going to make decisions that are counterproductive,” she said. Dolan believes Growing Water Smart, if widely adopted, “holds tremendous potential for shaping the future growth of the state.”

As far as Stapleton is concerned, the more bridges the program can help build among water managers, elected officials, and planners in the rapidly developing West, the better. “A lot of communities don’t have the water they need for the growth they are having or aspire to have,” he explained. “The communities that are going to thrive are the ones that are having these conversations now.”

Katharine Wroth is the editor of Land Lines.

In the three years since its creation, the Growing Water Smart workshop series has guided representatives from more than 30 Colorado jurisdictions through a strategic, collaborative process focused on the intersection of water and land use planning. This month, the program expands to Arizona. Credit: Courtesy of the Sonoran Institute.

“Everything was fine until it wasn’t,” reads the first line of these notes from a recent Growing Water Smart workshop. The program encourages municipalities to plan for a swiftly changing, resource-constrained future. Credit: Courtesy of the Sonoran Institute.