Contest Winners Use Maps to Tell Stories of Place
By Emma Zehner, November 15, 2019

What is the flood mitigation potential of urban parks in Houston? Could an urban growth boundary stop sprawl in the Buffalo-Niagara region? How do zoning regulations perpetuate racial inequality and poverty in Oakland? Academics and government officials explored these and other complex questions as part of The Place Database contest. The contest challenged researchers, policy makers, academics, and public officials to use maps created in The Place Database—a data visualization tool launched in 2017 by the Lincoln Institute of Land Policy and PolicyMap—as a basis to tell a story about a place or places. 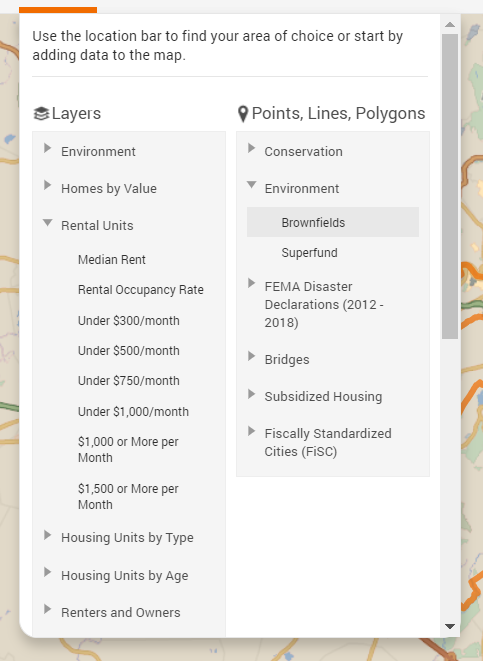 The Place Database is built on the PolicyMap platform and enables users to map a broad array of indicators from housing prices to zoning. It is designed to be easy to use for academics, local governments, the general public, and journalists, regardless of their experience with tools like ArcGIS, according to Jenna DeAngelo, associate director of international and institute wide initiatives at the Lincoln Institute. Users can search U.S. geographies and select from a list of data layers, such as aggregate transportation costs or local revenue per pupil, and data points, including brownfield sites and structurally deficient bridges. The platform can zoom down to the block group level and draws on information from sources like the U.S. Environmental Protection Agency and the U.S. Census Bureau.

In the past two years, the resource has been used in academic theses, as a tool for brokers and real estate agents, in curricula developed by the National Building Museum, and more. The most popular data layers include per capita income, median home value, and critical habitat, while the most frequently used data points have been LIHTCs, Brownfields, and FEMA floods.

The Lincoln Institute decided to host this contest to promote the tool and find out more about who was using the tool and how they were using it, DeAngelo said. It attracted over 40 submissions. A committee composed of Lincoln Institute and PolicyMap staff, a representative from the City of Cambridge GIS and Community Development departments, and a professor from Boston University reviewed the entries, selecting five winning projects and awarding $1,500 to each to develop a brief narrative using the maps that are now featured as use cases on the Lincoln Institute website.

One of the winning projects focused on housing in St. Louis, where the majority of affordable housing funded through the federal Low-Income Housing Tax Credit (LIHTC) program is concentrated in neighborhoods with extensive blight and vacancy and related poor health outcomes. Jason Whiteley, a research analyst at the St. Louis Planning and Urban Design Agency, used The Place Database to better understand what factors, such as restrictive single-family zoning in more affluent parts of the city, have created this current geographic distribution of LIHTC developments.

“We wanted to go beyond the standard talking points about siting affordable housing and look at a more local context and see what issues might impact siting decisions,” Whitley said. “This mapping exercise allowed us to see where the LIHTCs fall against a host of variables, such as vacancy, and served as a good starting point to talk about not just LIHTCs but all the different types of affordable housing in the city.”

In the Dallas-Fort Worth region, Reza Sardari — who earned a Ph.D. from the University of Texas at Arlington and is now an analyst at Cintra, a private sector transportation infrastructure company — explored the factors that are creating increased cost-burdens for low-income families.

In his narrative, cowritten by Raha Pouladi, a planner at the city of Celina, Texas, Sardari presented maps from the Place Database highlighting census tracts where housing costs consume 27 to 30 percent of household income. He also used a data layer that illustrates the percent change in housing price index to identify zip codes that have more recently started to face affordability challenges and might benefit from early interventions to preserve affordability.

Other maps in the project illustrated the spatial mismatch between the concentration of subsidized properties in the southern sector of Dallas and the increasing growth of low-wage jobs in the northern sector of the city. The project concluded with a list of approaches, such as inclusionary zoning, community land trusts, and improved access to public transit, that would create a more even distribution of subsidized housing throughout the city.

“Combining affordability with housing price changes is a unique contribution of the Place Database,” Sardari said. “House price change is missing in other data sources. Often you have to go look in other places.” Most datasets in the Place Database are updated every year as new data becomes available, according to DeAngelo, which allows users to map changes over time.

Sardari emphasized that being able to access a range of datasets on one site is also an advantage of the tool, as researchers often have to navigate between the websites of places like the U.S. Census Bureau, Internal Revenue Service, and Environmental Protection Agency to map multiple criteria. For instance, in his analysis, Whiteley was able to access datasets from the U.S. Department of Housing and Urban Development; Valassis Lists, a direct mail marketing company that compiles vacancy data; and the City of St. Louis, without leaving The Place Database platform.

For researchers who want to do a deeper dive, the Place Database offers the option to download datasets, Sardari added.

While none of the winners told stories across multiple geographies, DeAngelo said that this capability is another strength of the Place Database: “Many tools are hyper-focused on indicators in one city or region, but The Place Database lets policy makers compare U.S. geographies in one tool, as opposed to having to look at multiple tools that might not have standard data across places.”

The tool is one among a suite of free and accessible databases the Lincoln Institute offers, including the Atlas of Urban Expansion, Fiscally Standardized Cities, the State-by-State Property Tax at a Glance Visualization Tool, and Land and Property Values in the U.S.

Emma Zehner is communications and publications editor at the Lincoln Institute of Land Policy.

Image: The relative concentration of Low-Income Housing Tax Credit developments in and around census tracts with elevated levels of vacancy in the City of St. Louis. Credit: The Place Database/Jason Whiteley, St. Louis Planning and Urban Design Agency.