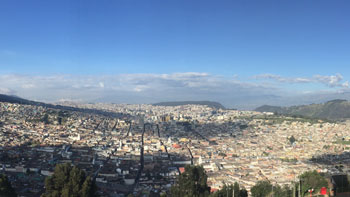 Land policy was at center stage at Habitat III in the high-altitude Ecuadorean capital of Quito last week, as the New Urban Agenda was formally adopted by representatives of 167 countries on the last day of the United Nations global cities summit. The official estimate was that more than 30,000 people participated. Highlights from the week:

- UN-Habitat executive director Joan Clos attended the debut of the Atlas of Urban Expansion 2016 edition, an online tool that can be used to monitor progress in the implementation of the New Urban Agenda. A partnership of UN-Habitat, New York University, and the Lincoln Institute, the new and improved Atlas – based on the initial online resource and three publications, the Atlas of Urban Expansion, Planet of Cities, and Making Room for a Planet of Cities – is an extraordinary library of satellite imagery showing how 200 sample cities have grown physically from 1990 to 2015. Accompanying analysis shows how land consumption is increasing at an unsustainable rate, and growth at the periphery of sprawling metropolitan areas in the developing world lacks open space, short blocks for walkability, and access to arterial roads for people to get to work. The Atlas was featured in The Atlantic's CityLab, and Greg Scruggs at Citiscope noted how the Atlas takes an abstract concept – global urbanization – and makes it more understandable.

- Experts and UN delegates from around the world emphasized municipal finance as a key pillar of sustainable urban growth, noting the need for much greater levels of services and infrastructure in the coming decades. Cities need to mobilize local revenue sources, particularly land-based revenues, lay the groundwork for better access to credit markets, and improve collaboration across national, provincial, state and local governments. In a panel convened by the Lincoln Institute, experts and officials from Ecuador, Canada, South Africa, Brazil, Peru, Germany and the United States highlighted value capture as a key tool for recovering the land value generated by government action and re-investing it for public benefit. Value capture strategies need to align with the land use goals and governance structures of individual places, they said. "It's not a technical problem," said Peruvian Congresswoman Marisa Glave Remy. "It's a political problem." Equally important for local government finance is the property tax, a stable source of revenue to fund public services, and a basis for many strong municipal debt markets. At another packed session, experts surveyed the use of the property tax in the U.S., Latin America, Africa, and, as a work in progress, in China. While the property tax is a sizeable revenue source in most advanced countries, revenue collected in the developing world is miniscule by comparison. Panelists agreed it is a fair tax, and its transparency is both a blessing and curse: quarterly or annual bills make it easy not to like, whereas few people have any idea how much they spend per year on the sales tax.

- Cities also need to take on some of the less flashy, but equally important aspects of municipal fiscal health, such as transparent financial management and regulatory frameworks, efficient systems for distributing funds across different levels of government, coordination of land-use and financial planning, and training to ensure that local governments are equipped to take on new challenges, experts said. The Lincoln Institute and UN-Habitat are collaborating on a global municipal fiscal database that will help cities understand and manage their finances.

- Enrique Silva, fellow and Associate Director of the Program on Latin America and the Caribbean, was a prominent voice in the General Assembly of Partners, and made a statement on behalf of civil society and academic and research institutions in the closing ceremonies on Thursday. The array of non-profit organizations and foundations that have been working so hard in the run-up to Habitat III are committed to helping with the implementation of the New Urban Agenda, Silva said.

In the media coverage of Habitat III and related issues, standouts included Next City – including a video interview with George W. "Mac" McCarthy -– Citiscope, Guardian Cities, and the Thomson Reuters Foundation.

City leaders need to be able to compare their own finances with other cities to maintain municipal fiscal health, said Lourdes Germán, director of International and Institute-Wide Initiatives, at Meeting of the Minds in Richmond, Calif. this week. Germán shared work on the user-friendly dashboard in development that will facilitate transparency and data sharing on an array of public finance components from debt profiles to expenditures, building on our Fiscally Standardized Cities database.

She was joined by Adam Hecktman, director of Technology and Civic Innovation at Microsoft in Chicago, and Dana Chisnell, co-founder of the Center for Civic Design and a consultant for the US Digital Service, The White House, who talked about technological advances throughout municipal services, including voting.

An important goal of Meeting of the Minds – now in its 10th year – was to rejuvenate the conversation around smart cities, a term that has been bandied about and somewhat over-used of late, said Gordon Feller, who has organized the convening for the past decade, in partnership with the Lincoln Institute.

The toolkit urges cities and states to reduce barriers to development including land-use restrictions, minimum parking requirements and onerous review and permitting processes. It calls for incentives to develop accessory dwelling units to expand the rental housing stock, as well as high-density projects that promote the use of transit, biking and walking.

Inclusionary housing and other strategies to create permanently affordable housing, including community land trusts, was central to the agenda at Intersections 2016, a major summit organized in Park City, Utah late last month by our partners at Grounded Solutions. More than 375 participants wrestled with such issues as the impact of short-term rentals under AirBnB, and whether required affordable housing units should be within the same building in new residential development or off-site. Journalists discussed how the media covers equity and gentrification in a roundtable that included Sommer Mathis, editor at CityLab, Grist writer Ben Adler, and Oscar Perry Abello, who has been writing about equity for Next City.

In Boston, the tax breaks package for GE is reasonable compared to other cities, but still not truly necessary, says researcher Adam Langley ... our team will be in Minneapolis this weekend delving into the latest in land conservation at the Land Trust Alliance Rally 2016; last month, the International Land Conservation Network Workshop on Emerging Innovations in Conservation Finance was a big success in Santiago, Chile, with partners Las Majadas de Pirque, David Rockefeller Center for Latin American Studies, Harvard University, Fundación Robles de Cantillana, Templado, and Qué Pasa. Here's a great southern hemisphere interview (in Spanish) with @landpolicy's Jim Levitt ... We provided perspective this month on property taxes and exemptions – in Princeton, in New York State, and in the New York Times ... George W. "Mac" McCarthy co-authored an op-ed essay appearing in the Denver Business Journal on tackling water challenges by way of regional collaboration, exploratory scenario planning, and land policy ... We're excited to partner with the Van Alen Institute for a special conversation on municipal finance next week ... A great debate on water rights at this year's Carver Colloquium in Denver (video) ... This month's highlighted Working Paper: Regional Governance and Institutional Collective Action for Environmental Sustainability in China, by Richard C. Feiock.