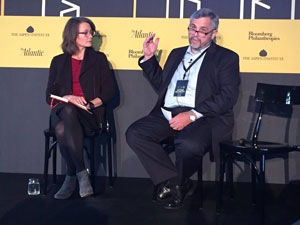 It was fitting to be in London, as white-hot a real estate market as can be found in New York or San Francisco, for Lincoln Institute President George W. "Mac" McCarthy to set the record straight about affordable housing. At the third annual CityLab Live, McCarthy had praise for the suite of strategies to bring about more balanced and diverse urban communities, including shared-equity housing, community land trusts, and inclusionary housing - in London, as much as 30 percent of new residential development is required to be affordable. But, he said, market-based solutions alone in the current context would take decades to catch up to cities' housing gap, estimated by McKinsey to require $16 trillion to be closed by 2025.

Private developers will naturally follow the path of least resistance, catering to high-end demographics, McCarthy said in a conversation with Jennifer Bradley, director of the Center for Urban Innovation at The Aspen Institute, co-sponsor of the three-day symposium with Bloomberg Philanthropies and The Atlantic. "It's a matter of political will," he said, adding that "it's really all about the competition for land and the markets for land."

Seeking to debunk some myths about private investment in housing development, McCarthy shared the affordability calculator, developed by Cornerstone Partnership's Rick Jacobus, author of the recently published report Inclusionary Housing: Creating and Maintaining Equitable Communities. By tweaking various elements in the prospectus of development projects - the cost of borrowing, subsidies, density bonuses, the cost of production, and zoning requirements such as minimum parking - the calculator shows how a significant portion of homes can be affordable while protecting a decent return for private investors. "This is an existence proof," he said. "If we had the will, we could produce affordable units."

The discussion was covered by Kriston Capps for CityLab, highlighting the affordability calculator and the notion of a moral element in the provision of affordable housing. "This makes the affordable housing conversation a little more legible," said Bradley, adding that "housing is not just about finance - it's about politics, design, and regulation."

Singapore, where the homeownership rate is about 80 percent, is an example of a city able to take dramatic measures to rework the housing sector. "They've done it by taking land out of the equation," McCarthy said, making "the entire city essentially one big community land trust." He also singled out Champlain Housing Trust in Burlington, Vermont, as capable stewards of both affordable purchased homes and rentals in the region. (The same week as CityLab Live, the National Community Land Trust Network met in Louisville, Kentucky for its annual meeting).

Also joining the discussion were Steve Adler, mayor of Austin, dealing with rapid population growth and increased housing costs, and London Deputy Mayor Richard Blakely, who shared the challenges of trying to integrate affordability into the city's astonishing growth. London is also focused on land-based initiatives, getting more land to market, and applying covenants to ensure affordability. Sheela Patel, director of SPARC, brought the conversation to the global scale, reminding the audience that housing in the cities of the developing world is a matter of homemade scrap materials on a tiny spot of occupied land, where residents are constantly worried about eviction. Finally, Peter Rabley, director of investments at the Omidyar Network, also emphasized the importance of land in the housing equation, as well as incremental interventions to help poor residents make improvements at their homes and avoid eviction.

In recognition of the growing importance of private and civic land conservation around the globe, conservationists from six continents joined together to mark the official launch of the International Land Conservation Network (ILCN) at the Network's First Congress in Berlin, Germany on Oct. 19-21.

A project of the Lincoln Institute of Land Policy, the Network is devoted to connecting people and nongovernmental organizations, building capacity and sharing ideas to promote the more rapid and effective use of civic and private land conservation strategies.

The Network builds on the success of the Land Trust Alliance, which was launched by the Lincoln Institute in 1982. Now an independent organization based in Washington, D.C., the Alliance has grown to represent more than 1,100 land trusts in the United States.

"Land trusts have preserved and protected 50 million acres of land in the U.S," said Laura Johnson, Director of the International Land Conservation Network and Board Chair of the Land Trust Alliance. "Now we have a real opportunity to both learn from, and share expertise with conservationists in other nations as we work together to protect the natural systems upon which human life depends."

The formation of the international network comes at a time of great need for land conservation, with an estimated 2 billion hectares of degraded land - an area larger than South America - available for rehabilitation, according to the United Nations. An additional 12 million hectares are degraded every year.

The Network launched with the support of major international policymakers. "In these times of great challenges for nature conservation, such as climate change and biodiversity loss, it is becoming even more important to unite our efforts across borders, across continents and across the world to strengthen the protection and management of our natural capital," said Daniel Calleja Crespo, Director-General for Environment of the European Commission.

"I want to commend the ILCN for their leadership in the global land conservation movement," said United States Senator Tim Kaine of Virginia. "By connecting and empowering nonprofit and private land conservationists around the world, you have the power to make a major impact."

The Kingsbury Browne fellowship and award is named for the Boston tax lawyer who is considered the father of America's modern land trust movement, a network of land trusts that have conserved more than 37 million acres. Browne's 1981 gathering of conservation leaders from across the country at the Lincoln Institute evolved into the Land Trust Alliance.

Lincoln Institute President George W. "Mac" McCarthy shared how the land-based financing tool, value capture can help fund infrastructure with an audience of urban and technology leaders at Meeting of the Minds in Richmond, California ... The Lincoln Institute took part in an ongoing global conversation about cities in the run-up to next year's Third United Nations Conference on Housing and Sustainable Urban Development (Habitat III), leading a workshop on municipal fiscal health to help inform the Habitat III agenda at the Urban Thinkers Campus in New York, and giving a presentation on the Atlas of Urban Expansion at the Urban Journalism Academy, a forum for those writing about global urban issues ... Senior Fellow Armando Carbonell advises prudence in the distribution of state land trust funds ... George W. "Mac" McCarthy questions American assumptions about urban density ... The Lincoln Institute's recent report on affordable housing continues to resonate ... This month's highlighted working papers: Who Will Be Affected by a Congestion Pricing Scheme in Beijing?, by Joshua Linn, Zhongmin Wang and Lunyu Xie; and Housing Supply and Regulation in 35 Chinese Cities, by Lingxiao Li and Stephen Malpezzi.