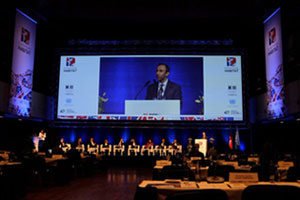 A delegation from the Lincoln Institute was in Prague last week for the UN-HABITAT Europe Regional Meeting for Habitat III, continuing our engagement in the run-up to the global cities summit in Quito, Ecuador this fall, with an emphasis on financing the New Urban Agenda.

A presentation was made on the recently posted Policy Paper Municipal Finance and Local Fiscal Systems, authored by the Lincoln Institute and the World Bank working with a team of experts. The paper establishes how municipal governments oversee the provision of public goods and services to a growing majority of the world's inhabitants, and "accordingly, improving the capacity of local governments to fund those services, and the transparency and accountability of the funding process, impacts the quality of life and level of citizen engagement ... Municipal finance is the operational fulcrum on which the success of ongoing future rapid urbanization rests."

Enrique Silva, senior research associate for the Latin America and Caribbean Program, presented case studies from Brazil to highlight critical issues in municipal fiscal health and illustrate innovations in planning and land based financial tools, including value capture, at a side event co-sponsored with the Organization for Economic Co-operation and Development (OECD) titled "How to Govern Land Use In Metropolitan Areas."

Silva, who is also the co-chair of the Research and Academics Constituent Partner Group of the General Assembly of Partners, also participated in a second side event organized by the GAP titled "The Straight Path to Habitat III: Part III Knowledge Platform for the New Urban Agenda." GAP is an initiative of the World Urban Campaign that provides a platform for consensus building and partnerships within the preparatory processes toward Habitat III and beyond.

Also submitted at Prague: a brief statement about our mission and recommendations for the Habitat III process and the content of the Summit's final product, the New Urban Agenda.

As local governments continue their struggle to recover from the Great Recession, the Lincoln Institute of Land Policy has expanded a signature interactive database to allow for the meaningful comparison of finances across 150 U.S. cities. With the addition of 38 new cities, the Fiscally Standardized Cities (FiSC) database now includes at least two cities in all but two states, allowing for a broader analysis of how the nation's largest cities pay for public services, from schools to police to public works.

"As local governments and citizens grapple with tough issues like education, infrastructure and land use, having a clear picture of how 150 cities pay for public goods and services is incredibly valuable," said George W. "Mac" McCarthy, president of the Lincoln Institute.

Created in 2013, the FiSC database provided the first meaningful comparison of local government finances at the city level by untangling the complex web of governmental entities in each city - including counties, independent school districts and special districts - to provide an overview of revenues raised from city residents and businesses and spent on their behalf. The database includes data for each year from 1977-2012, tracking more than 120 categories of revenues, expenditures, debt, and assets (for more details, view the working paper "Methodology Used to Create Fiscally Standardized Cities Database").

Later this year, the Lincoln Institute will further enhance the database with the addition of a new year's worth of fiscal data from the U.S. Census Bureau, new data on public pensions, and analysis that will help put the data in context. In addition, the Institute will unveil a new Municipal Fiscal Health Dashboard, which will provide a visualization platform for the FiSC database, incorporate additional financial and demographic data, and add features such as a liquidity calculator.

At $3.7 trillion, the U.S. municipal bond market is so massive it is incomprehensible to many citizens. And as the source of financing for two thirds of schools, roads, hospitals, and other infrastructure, it is critical to the quality of life of states, cities and towns of all sizes.

A financial market cannot function well without one key ingredient - transparency - said Lynnette Kelly, executive director of the Municipal Securities Rulemaking Board, at a recent presentation at the Lincoln Institute.

"Transparency promotes future access, lower borrowing costs and improves credibility with stakeholders," said Kelly, noting that a transparent municipal debt market benefits state and local governments as much as it does investors.

Historically, information about municipal bonds has not always flowed freely, a problem that came to a head in the 1970s when New York City sold billions of dollars of bonds based on overinflated revenue projections, and reached the brink of bankruptcy after the local bond market collapsed. The Municipal Securities Rulemaking Board was created by Congress in 1975 in response to that upheaval.

The MSRB regulates bond dealers, underwriters, and advisors that participate in the municipal debt market, and the agency also maintains a public database of disclosures, prices and other information about municipal bonds. Over the past four decades the MSRB has helped increase transparency and narrow the information gap between large institutional investors, financial firms, individuals, and bond issuers.

But challenges remain. Six years ago, with the passage of the Dodd-Frank financial reform legislation, the MSRB received new authority to regulate municipal advisors, who act as counsel to cities and towns accessing the bond markets. The MSRB established a professional qualifications exam and basic rules these advisors, who had previously gone unregulated.

"This is such an integral rule to prevent conflicts of interest and insure that professionals are hired based on merit," Kelly said.

The presentation, including a conversation with Lincoln Institute Fellow Lourdes Germán, can be viewed in its entirety here. The event was the latest installment in a series devoted to municipal fiscal health.

Last week the Lincoln Institute convened 32 journalists from 24 cities throughout Latin America in Lima, Peru for a course on land policy and urban development, organized in partnership with the Press and Society Institute ... Lincoln Institute Fellow Lourdes Germán is recognized by the Boston Mayor's Office of Women's Advancement as part of the EXTRAordinary Women Campaign for her work on civic engagement ... Amid zombie subdivisions and abandoned roller coasters in Florida, NASA seeks to reinvent the Kennedy Space Center ... China's new urban development guidelines could change the shape of urbanization there ... This month's highlighted Working Paper: Integrating Exploratory Scenario Planning into a Municipal General Plan Update, by Joe Marlow, Hannah Oliver, Ray Quay, and Ralph Marra ... Finally, it is with great sadness that we announce that Joan Elise Rechtin Lincoln, a renowned civic leader and ceramicist, passed away at the age of 88 on March 7, 2016, at her home in Paradise Valley, Arizona. She is survived by David C. Lincoln, son of the Lincoln Institute's founder, John C. Lincoln, four children, six grandchildren and twelve nieces and nephews.