Land's role in a changing China 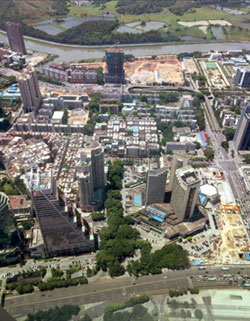 The world is watching China, not only for its impact on global financial markets, but also to see how the country's unprecedented urbanization will continue to unfold amid a changing economy. Having grown at scale unseen in human history, China's cities now face an economic slowdown and potential glut of new housing, particularly outside top-tier markets such as Beijing, Shanghai and Shenzhen.

The future of China's urban development will have a tremendous effect on the nation's economy. A 10-percent decline in real estate would equate to a 2-percent decline in gross domestic product due to ripple effects in industries ranging from cement to food to textiles, according to a recent presentation at the Lincoln Institute by Ting Shao, who studies real estate at China's Development Research Center of the State Council.

Among the challenges related to China's housing market is the huge reliance of cities on new development for the revenue needed to deliver public goods and services. Some two thirds of local government revenue comes from real estate taxes and fees, primarily from the sale of land use rights. "China is in uncharted waters when it comes to local governments' reliance on the sale of land development rights to raise revenue," said George W. "Mac" McCarthy, president of the Lincoln Institute. "In light of recently announced land reforms, China will need to find creative ways to build revenues bases under its cities. To its credit, the central government has embraced an opportunity to learn from the experiences of other nations that have struggled to achieve balanced and sustainable growth."

Experts from Peking University-Lincoln Institute Center have been working with officials in China on the introduction of the nation's first residential property tax, which could provide a more stable source of local government revenue and temper speculation in the housing market.

McCarthy recently attended a Beijing roundtable on the property tax, featuring experts from Canada, Indonesia, Korea, Lithuania, South Africa, Taiwan (China), the United Kingdom and the United States, who shared their nation's experience implementing the property tax. He visited several urban land redevelopment projects and met with local land authorities in Guangzhou, participated in a roundtable with the Guangdong Provincial Bureau of Land Development and Reserve, and gave a lecture on the history of urban redevelopment in the U.S. to representatives from local planning and land bureaus and institutions.

Sometimes, tax incentives can be useful. Public officials can offer them to encourage a company to clean up and reuse land in a struggling postindustrial city, or open a grocery store in a food desert.

But more often than not, cities and states provide tax breaks in a desperate attempt to compete with one another for jobs, using them even when they play little, if any role in a company's decision about where to locate.

In a recent presentation at the Lincoln Institute - the second installment in our series of lectures under the theme of municipal fiscal health - Greg LeRoy, executive director of the Washington, DC-based organization Good Jobs First, described how large companies pit cities and states against each other, encouraging them to offer greater and greater incentive packages, to the tune of more than $70 billion per year nationwide.

"Public officials' view of the process gets incredibly distorted because they think they're actually influencing the behavior when they are not," LeRoy said in a conversation with Lincoln Institute President George W. "Mac" McCarthy.

LeRoy discussed the variety of property tax abatements, corporate income tax credits and other breaks offered in increasingly large amounts to retain or attract jobs, such as the state of Washington's record-breaking $8.7 billion offering to Boeing in 2013, or Nevada's $1.3 billion package awarded to Tesla Motors in 2014. A relatively modest but still notable package of incentives was offered to General Electric in that company's relocation of headquarters form Fairfield, Conn. to Boston.

When large companies relocate, or open a new facility, they focus on the factors that relate directly to their business model, such as the cost of labor, the availability of a skilled workforce, or the proximity to important infrastructure. A Lincoln Institute study found that tax breaks have almost no impact on a firm's profitability. Property taxes, the study found, average much less than 1 percent of total costs for the U.S. manufacturing sector.

However, companies have come to expect state and local tax incentives, and they have the leverage to push for them.

For local and state officials, the political risk of losing a company to a rival location outweighs that of providing overly generous incentives, even though they come at taxpayers' expense, LeRoy said.

The good news is that some cities and states are taking steps to reduce the use of wasteful tax incentives. They are creating agreements with one another to refrain from actively "poaching" companies, and requiring companies that receive tax breaks to meet performance requirements. In addition, new disclosure requirements - especially at the state level - and government accounting standards are helping to provide more transparency about the cost of tax incentives.

The Lincoln Institute rolled out a new logo, tagline and statement about its role and impact earlier this month, as part of a broader effort to refresh the organization's public presence and reach a wider audience.

The Lincoln Institute of Land Policy is an independent, nonpartisan organization whose mission is to help solve global economic, social, and environmental challenges to improve the quality of life through creative approaches to the use, taxation, and stewardship of land.

"From time to time, think tanks like the Lincoln Institute need to consider whether they are packaging content in a way that draws people to read and use it," Lincoln Institute President George W. "Mac" McCarthy said in a message in the Institute's quarterly Land Lines magazine. "We are not reinventing the Lincoln Institute, but aiming to introduce our work to broader audiences and to clarify the threads that connect seemingly disparate topics."

Together, the logo, tagline and statement mark the continuation of a process that began a year ago with the re-imagination of Land Lines, the Lincoln Institute's quarterly magazine, which features a new design and stories by journalists that connect land policy with the people who are impacted by it. In August, the Lincoln Institute launched a multiyear campaign to promote municipal fiscal health. And later this year, the organization will complete the redesign of its website, www.lincolninst.edu, which will help tell the story of how land policy can improve the quality of life for people around the world.

"An ongoing public outreach effort, clear and crisp, will facilitate the impact we want our work to have on policy and on communities," McCarthy said.

Middlebury College is the first recipient of the Charles H.W. Foster Award for Exemplary Academic Leadership in Land Conservation, co-sponsored with Harvard Forest and celebrated Monday at Harvard's Kennedy School ... Detroit cuts property assessments, one recommendation of our report ... We share lessons from Boston's Big Dig with Seattle ... A 1960s highway dispute as a template for modern planning ... This month's highlighted Working Paper: What Drives Neighborhood Trajectories In Legacy Cities? Understanding The Dynamics Of Change, by Alan Mallach.