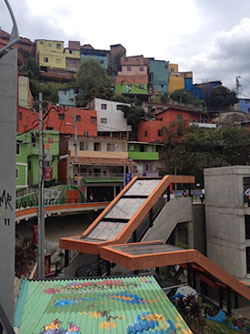 From Ferguson to Medellín, 2014 has been a year of tumult and promise for cities. The World Urban Forum showcased the many ways the former drug capital in Colombia was making life better for poor residents, with gondolas, libraries, and parks. Meanwhile, racial divisions and inequality in St. Louis and other Legacy Cities had a basis in planning decisions and infrastructure investments going back decades. The concept of shared equity housing gained ground, some zombie subdivisions began to make a comeback, and New York City and Connecticut tested the waters with a land value tax. We asked the experts of the Lincoln Institute of Land Policy to reflect on what they considered the top stories of the year, and here's what they said:

The property tax has a bedrock role in the funding of K-12 education, and the Lincoln Institute is proud to make new research freely available on the subject in a special issue of the journal Education Finance and Policy. Eight articles in the Fall 2014 issue of the journal can be downloaded without charge from the website of the Association of Education Finance and Policy.

A fresh look at the intersection of the property tax and school finance is important for several reasons. Total revenues devoted to public education have fallen in recent years, revenue growth is sluggish in many states, and there are diminished prospects for increased federal funding for K-12 education. Local school districts will be under growing pressure to increase property taxes, or to turn to alternative sources of local government revenue.

An introductory chapter by Lincoln Institute fellows Daphne Kenyon and Andy Reschovsky sets out three themes: the potential for unintended consequences from state legislation; the potential for state school finance and property tax policies to provide greater advantages for high-wealth or high-income school districts than for low-wealth or low-income districts; and the enduring importance of the property tax in the funding of public education in the United States. Among the significant findings of the research:

Of housing and big plans

Housing and Global Urbanization: Learning from Le Corbusier was the topic of the final presentation in the Fall 2014 lecture series. Born Charles-Edouard Jeanneret-Gris, Le Corbusier rebranded himself and established his architectural practice in Paris in the roaring twenties, revolutionizing the design of homes and apartments, government buildings, and churches. The United Nations compound in New York City is essentially his design; his vision of urban planning was realized in the city of Chandigarh, India, which he built from scratch on the Himalayan plain. Within walking distance of the Lincoln Institute, the Carpenter Center at Harvard University is his only building in North America. But although he has been revered in architecture schools, over the years the condemnation has grown, as blame is traced to him for inspiring the towers in the park, freeways and concrete complexes of urban renewal.

The lecture was based on the recently published book Modern Man: The Life of Le Corbusier, Architect of Tomorrow, by Anthony Flint, fellow and director of public affairs at the Lincoln Institute. The proposition was that there are valuable lessons that may yet be teased from the father of modern architecture, beginning with his innovative and efficient housing ideas - seen in today's trend of micro-apartments - and his appreciation of the grand scale needed to plan the developing world's burgeoning cities in the 21st century. The ensuing conversation explored the role of the architect today in urban planning and urban design, and the place of big plans versus more organic and self-organizing iterations promoted by Jane Jacobs, in the context of global urbanization.

The impact of historic districts on local housing markets is examined in this paper by authors including Vicki Been and Ed Glaeser ... At MoMA, exploring tactical urbanism … Manufactured housing – under-utilized and misunderstood? ... China opened 32 high-speed rail routes this week, including Shanghai-Guangzhou, the equivalent of LA to Seattle ... Facing gentrification, Oakland wants to stop being known as the next Brooklyn ... This month's highlighted working paper: An Open Field: Emerging Opportunities for a Global Private Land Conservation Movement, by Laura A. Johnson, now a visiting fellow at the Lincoln Institute. Happy Holidays from all of us at the Lincoln Institute of Land Policy!