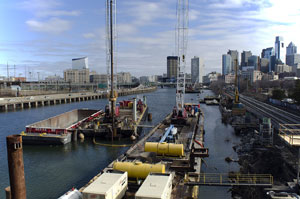 The conventions seem long ago, in the rapid pace of this year's presidential campaign. But it's still worth considering that for both Cleveland and Philadelphia, site of the Republican National Committee and Democratic National Committee conventions respectively, the day-to-day struggle to maintain municipal fiscal health remains.

An analysis of the Lincoln Institute's Fiscally Standardized Cities database reveals that both cities are struggling with structural issues that in fiscal terms keep them on the brink. The database allows comparison of local government finances for 150 of the largest U.S. cities across more than 120 categories of revenues, expenditures, debts and assets.

The findings along with newly compiled charts showing trends in expenditures, revenues, and the impact of housing markets, appeared in an op-ed essay by Lincoln Institute research fellow Andy Reschovsky, published by Next City last month.

Like many other post-industrial cities, Cleveland and Philadelphia are grappling with population loss, declining employment, particularly in manufacturing, highly fragmented metropolitan areas, the lingering effects of the Great Recession, and the boom and bust of the housing market, Reschovsky writes. Cleveland and Philadelphia are experiencing the same turbulence as many other cities in the database:

There is a positive impact of hosting the major party conventions, to be sure. The US Travel Association reported that Philadelphia will reap $180 million in direct spending as a result of the DNC event. Cleveland, as well, has been investing heavily in its downtown, which was showcased during the RNC. But while the two cities were in the spotlight, we hope a serious conversation about fiscal challenges in cities can take place in this campaign.

From the effectiveness of California's film tax credit to role of insurance in climate change resilience, recipients of the Lincoln Institute of Land Policy's C. Lowell Harriss Dissertation Fellowship will undertake a variety of research on the cutting edge of tax and land policy.

The fellowship, named in honor of the Columbia University economist (1912-2009) who served for decades on the Lincoln Institute's board of directors, supports work on doctoral dissertations. The program provides a link between the Lincoln Institute's educational mission and its research objectives by supporting scholars early in their careers. The recipients and their topics are:

A thoughtful and thorough review of A Good Tax by senior fellow Joan Youngman in Urban Land magazine ... The rise of Airbnb as a housing market force ... A fervent call for the land value tax ... Planning for the driverless car revolution ... At Chautauqua, President George W. "Mac" McCarthy on the future of smaller cities (video) ... An African city's quest for fiscal health, and the role of land ... After the Olympics, the world's attention turns to Habitat III in Quito; Enrique Silva, in this video interview by Next City, talks about the role of Latin American countries ... This month's highlighted Working Paper: Leadership of Land Trusts: Generational Transition and Preparing for the Future, by Jean Hocker.