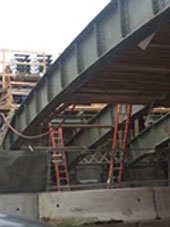 Yesterday we made official what we've been working on for several months now - a multi-year campaign to promote Municipal Fiscal Health in the U.S. and worldwide, to help cities confront an epidemic of insolvency and restore the capacity for local governments to provide basic services and plan for the future.

"We need a fresh start that recognizes the structural elements of the fiscal stress we see in cities in the U.S. and all around the world, from Puerto Rico to China and throughout the burgeoning metropolitan areas in the developing world," said George W. "Mac" McCarthy, president of the Lincoln Institute.

"Our roads, sewers and levees are crumbling under the weight of fiscal stress and underinvestment," said former Transportation Secretary Ray LaHood, co-chair of Building America's Future and a Lincoln Institute board member. "Putting cities on strong financial footing is critical for protecting the basic public goods and services many citizens take for granted."

As part of the Municipal Fiscal Health campaign, the Lincoln Institute will share public policy ideas, conduct research, provide education and training, foster regional and international dialogue and help equip policymakers with tools to address their communities' unique fiscal challenges. These are just some of the activities in the mix:

Whether measured in infrastructure gaps - $3.6 trillion in the U.S. by some accounts - or precarious financial instruments - $3.3 trillion in underfunded municipal debt in China - the fiscal challenges facing the world's municipalities are deeply troubling. In addition to the challenges of meeting existing infrastructure needs, growing urban populations and a changing climate require local governments to make additional, preemptive investments for the future of their communities, to plan and prepare for growth and sustainability.

At the same time that cities face such historic needs, numerous municipal bankruptcies, most notably Detroit in 2013, have highlighted the problems of chronically meager or diminishing revenues, increasing costs of providing public goods and services, mounting historical obligations, and expanding responsibilities imposed both by higher-level governments and local citizens. While the housing crisis and Great Recession of 2008 exacerbated the problem, the roots of cities' fiscal problems go back many decades.

The foundation of the Municipal Fiscal Health campaign is to provide cities with the fiscal tools and strategies necessary to support their vital role in society, grounded in these six key areas:

Intersection of Planning and Public Finance In many cities, planning for growth and major infrastructure projects is conducted separately from budgeting and finance. Coordinating these functions is critical for navigating the ups and downs of revenue cycles and preparing for the costs of maintaining projects over time.

Land-Based Municipal Revenues Land-based revenue models, including the property tax and land-value increment tax, which captures the increase in property values resulting from public actions and investments, can play a significant role in municipal fiscal health. Communities lacking the basic tools or land ownership patterns to use these tools will require innovative ways to leverage land-based revenues.

Multi-Level Governance Decisions by state, provincial, federal or central governments can have serious impacts on local government finances, and poor higher-level decisions helped catalyse the decline of Detroit and other cities in the United States. Coordinating efforts to monitor local fiscal health and intervene in instances of local fiscal stress, as well as improving the allocation of state and federal funding, is critical to creating a legislative and political environment conducive to Municipal Fiscal Health.

Monitoring Fiscal Health and Local Transparency Sound fiscal monitoring and transparency provide the opportunity for intervention before municipal fiscal stress degrades public services, endangers the integrity of infrastructure, or devolves into municipal bankruptcy. The Lincoln Institute is developing a community scorecard to help communities and lawmakers track the fiscal health of their local governments.

Capital Accounts and Infrastructure Investment Fiscal stress can have a serious impact on capital accounts, and is a factor in the chronic underinvestment in infrastructure - $3.6 trillion in the U.S. and up to $40 trillion globally. Failure to maintain infrastructure has been responsible for catastrophes such as the collapse of an interstate highway into the Mississippi River, the explosion of buildings in Harlem due to leaks in century-old gas lines, and the failure of levees during Hurricane Katrina.

Unfunded Obligations Unfunded obligations such as debt and public pensions, and forgone revenue such as tax abatements and concessions contribute to fiscal stress. For example, Chinese cities have amassed $3.3 trillion in debt in less than a decade without a clear path to repayment, Puerto Rico's recent bond default threatens to cascade into the largest municipal credit default in history and unfunded retirement benefits hamper the post-recession recovery of many U.S. cities.

While at the Ford Foundation working on affordable housing, Lincoln Institute President George W. "Mac" McCarthy became convinced about the huge potential of an unrecognized sector of the national housing stock – manufactured homes. Setting aside the scorn of trailer parks, "redneck Rivieras," and Kentucky double-wides, he discovered that homes built in factories represent the largest unsubsidized affordable housing stock in the U.S. Almost 8 million families, with a median income of $29,000, reside in manufactured homes.

In the final Lincoln Lecture of the spring season last month, From Social Stigma to Housing Solution: The Case of Manufactured Housing, McCarthy reported on the work of a group of plucky social entrepreneurs who embarked on a Quixotic effort to transform the manufactured housing sector - and the unexpected results of their efforts to preserve and expand this essential component of the national affordable housing stock.

While efficient manufacturing reduces production costs and high-density, low impact development promotes smart growth, newer homes often outperform site-built housing in both quality and design. And yet, with a few notable exceptions, affordable housing practitioners remain ignorant of, or are openly hostile toward, this housing stock-instead of embracing it as a potential solution to affordable housing challenges.

In the 1990s, manufactured housing accounted for two-thirds of new affordable single family housing, and nearly half of homes under $150,000. Over two-thirds of these homeowners earn less than $50,000 (80 percent of median income for most regions). More than 80 percent never move. Contrary to popular belief, the homes aren't assets that diminish in value over time, so long as families control the land under their homes. There are an estimated 50,000 manufactured home communities in 3,100 counties, with an estimated three million homeowners who lease the land beneath their homes.

A key effort is to get the manufactured home industry to produce better products – something that has been embraced by Warren Buffet in Clayton Homes. "People are doing it right and making money," McCarthy said. The Federal Housing Administration has changed rules to improve financing, though as McCarthy noted, "People who own manufactured homes are still paying too much in the lending."

The July issue of Land Lines featured an article on manufactured homes, From Stigma to Housing Fix: The Evolution of Manufactured Homes. Earlier this year, another article published in Hawaii looked at greater openness to manufactured homes. George McCarthy's full lecture can be viewed here.

African cities are beginning to look like urban expansion in China; satellite imagery-based trends like this can be seen at the Atlas of Urban Expansion, soon to be updated ... Ten years after Hurricane Katrina, concern about accurate flood predictions ... Lincoln Institute board member Andrea L. Taylor was named director of the Birmingham Civil Rights Institute ... The Denver Post took a thorough look at the property tax, citing our research ... At Next City, affordable housing's forever solution – Community Land Trusts ... Tax breaks for developers are being re-assessed, according to The Boston Globe, quoting Adam Langley, co-author of Rethinking Property Tax Incentives for Business ... Habitat III must address financing, Lincoln Institute president George W. "Mac" McCarthy writes in this op-ed at Citiscope ... This month's highlighted Working Paper: Cowboys and Conservation: A Short History of and Reflections on the Dramatic Growth of Private Land Conservation in Western Ranching, by Kingsbury Browne Fellow Lawrence R. Kueter.