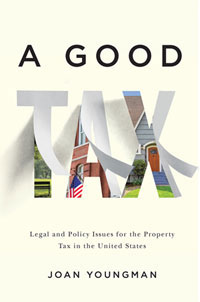 The property tax, a mainstay of local government, is the subject of continual controversy, with numerous ballot measure to place caps on it, or even in some cases proposals to eliminate it completely. But in fact it is a fair, democratic, stable and efficient source local revenue, attorney and property tax expert Joan Youngman argues in "A Good Tax: Legal and Policy Issues for the Property Tax in the United States", a new book published by the Lincoln Institute.

The property tax generates some $472 billion per year in local revenue in the United States, making it a critical source of funding for schools, police and fire protection, and other public services. It is also a highly transparent tax, holding local governments accountable to citizens, who can see clearly how their tax dollars are spent.

However, a series of populist revolts, beginning with California's Proposition 13 in 1978, have weakened the property tax and led to unintended consequences.

Through a detailed analysis of the legislative and administrative issues facing policymakers, Youngman outlines ways in which state and local governments can provide taxpayer relief, when necessary, while preserving crucial provisions of the property tax, such as the accurate assessment of every property based on the fair market value.

"At a time when many governments are facing fiscal difficulties and the need to address delayed or deferred financial obligations of all types, an effective property tax can be a valuable instrument for the common good," Youngman writes.

The book is available in print and electronic formats here. In addition, an interview with Joan Youngman was published in National Mortgage Professional Magazine.

Strengthening local economies, managing water resources, and planning for an uncertain future were high on the agenda as more than 4,000 planners, elected officials and others gathered in Phoenix earlier this month for the American Planning Association's National Planning Conference.

As part of a program that brings planning directors from the nation's largest cities to the Lincoln Institute each year, Armando Carbonell, senior fellow and chair of the department of Planning and Urban Form at the Lincoln Institute, led a lively discussion about the diverse experiences of cities that have attempted to create innovation districts, areas where anchor institutions and startup businesses cluster, fueling local economies and making neighborhoods more vibrant. He was joined by St. Louis Planning Director Don Roe, Columbus, Ohio Development Director Steve Schoeny, Brookings Institution Senior Policy Analyst Scott Andes, and APA Research Director David Rouse.

And as Western states continue to struggle with historic drought conditions, Peter Pollock, Manager of Western Programs for the Lincoln Institute, led a discussion about the challenges of managing water and growth with Josh Ellis of the Metropolitan Planning Council in Chicago, Donald Elliott, FAICP, of Clarion Associates and Jeffrey Allenby of the Chesapeake Conservancy.

The Lincoln Institute engaged in a number of other discussions on key planning issues including innovations and challenges in restoring waterways in the Colorado River Basin; scenario planning tools that help communities account for an uncertain future; successes and obstacles in preserving large landscapes in the eastern and western United States, planning trends in the American southwest, and local responses to oil and gas development in communities as diverse as Gunnison, Colo. and Arlington, Texas.

The Lincoln Institute also previewed the forthcoming book Nature and Cities: The Ecological Imperative in Urban Design and Planning, edited by Armando Carbonell, Frederick R. Steiner, and George F. Thompson, debuted A Good Tax, and celebrated Carbonell's induction into the Fellows of the American Institute of Certified Planners.

Leaders from the United Nations Human Settlements Programme (UN-Habitat) and the Lincoln Institute have signed an agreement to create a pilot for a global municipal fiscal database that will result in the reporting of fiscal data for select cities in Asia, Latin America, and Africa.

The work on the global municipal fiscal database will be led by Lourdes Germán, from the Lincoln Institute, in coordination with Marco Kamiya at UN-HABITAT.

The fiscal health of municipal governments is critically important to the successful implementation of the New Urban Agenda and the United Nations Sustainable Development Goals focused on making cities and human settlements inclusive, safe, resilient and sustainable. Access and transparency with respect to fiscal data supports fiscal health by helping to identify problems before fiscal stress degrades public services, endangers infrastructure, or devolves into a municipal bankruptcy.

This project, covered recently by Public Finance International, will introduce a new online resource to academics, leaders of cities, private sector stakeholders, and others who want to understand the data related to the fiscal health of municipal governments and identify policies that can improve city finances. It will enhance understanding of the costs and benefits of urbanization, planning for the expansion and extension of cities, and undertaking economic development activities within cities.

As part of a campaign to promote municipal fiscal health, the Lincoln Institute has been working closely with the United Nations and stakeholders in preparation for Habitat III, the major global cities summit in October in Quito, Ecuador, where member states will adopt a New Urban Agenda for sustainable urban development.

Top journalists from across the U.S. - and several from around the globe - convened in Washington, D.C. last week for a Lincoln Institute forum on the theme of municipal fiscal health. We'll share more about this soon ... Former Land Trust Alliance President and CEO and Lincoln Institute Kingsbury Browne Fellow Jean Hocker is optimistic about the new generation of land trust leadership ... Local officials from all six New England states discussed fiscal health at the Lincoln Institute ... The costs, benefits and risks of luring GE to Boston ... The Lincoln Institute sets the record straight on local revenues ... This month's highlighted Working Paper: Housing Supply and Regulation in 35 Chinese Cities, by Lingxiao Li and Stephen Malpezzi.