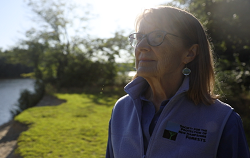 CAMBRIDGE, MA – Jane Difley, a forester and conservation pioneer who led the Society for the Protection of New Hampshire Forests (the Forest Society) for 23 years, has been named the new Kingsbury Browne Fellow at the Lincoln Institute of Land Policy and the recipient of the Kingsbury Browne Conservation Leadership Award from the Land Trust Alliance (LTA).

Difley, who served as an intern with the Forest Society in graduate school, returned to lead the organization in 1996, doubling the size of its conserved Forest Reservations to 56,000 acres during more than two decades as president. Under her leadership, the Forest Society played a pivotal role in the creation of the Land and Community Heritage Investment Program (LCHIP), a state authority that supports the conservation and preservation of New Hampshire’s natural and cultural resources. LCHIP has since made 240 grants to land conservation and historic preservation projects in 141 communities across the state, protecting a total of 260,000 acres and 142 historic structures in the process. Difley retired from the organization this fall. (Listen to an extensive New Hampshire Public Radio interview with Difley about the shifts she has observed in land conservation and forest management throughout her career.)

“Jane Difley has had a remarkable career as a pioneering leader in conservation. She is certainly beloved in New Hampshire, where she served at the helm of the Society for the Protection of New Hampshire Forests for the past 23 years,” said Jim Levitt, who leads the Lincoln Institute of Land Policy’s land conservation efforts. “Under her leadership, the Forest Society has helped to protect about 300,000 acres, its epic advocacy efforts to block a major transmission line through the heart of the state has succeeded, and it continues to be a leading force for conservation education from Nashua to the Canadian border.”

The Kingsbury Browne fellowship and award, given since 2006, are named for Kingsbury Browne, a Boston tax lawyer and conservationist who served as a Lincoln Fellow in 1980 and helped to form the LTA in 1982. Difley was officially recognized at Rally 2019, the LTA’s annual gathering of land conservation professionals, held in October in Raleigh, North Carolina. During 2019–2020, Difley will engage in research, writing, and mentoring at the Lincoln Institute.

Previous recipients of the fellowship include Michael Whitfield, executive director of the Heart of the Rockies Initiative, who has built partnerships among landowners, civic leaders, government officials, and scientists to protect iconic landscapes in the Rocky Mountain West; Will Rogers, head of The Trust for Public Land; David Hartwell, an environmental leader who has helped mobilize billions of dollars for conservation projects across Minnesota; Steve Small, a legal pioneer who paved the way to make conservation easements tax-deductible in the U.S.; Jean Hocker, a former president of the LTA and longtime board member at the Lincoln Institute; Larry Kueter, a Denver attorney specializing in agricultural and ranchland easements in the West; Peter Stein, managing director of Lyme Timber Company; Audrey C. Rust, president emeritus of the Peninsula Open Space Trust based in Palo Alto, California; Jay Espy, executive director of the Elmina B. Sewall Foundation; Jamie Williams, president of The Wilderness Society; Laurie A. Wayburn, cofounder of the Pacific Forest Trust; Mark Ackelson, president of the Iowa Natural Heritage Foundation; and Darby Bradley, president of the Vermont Land Trust.

About the Lincoln Institute

The Lincoln Institute of Land Policy seeks to improve quality of life through the effective use, taxation, and stewardship of land. A nonprofit private operating foundation whose origins date to 1946, the Lincoln Institute researches and recommends creative approaches to land as a solution to economic, social, and environmental challenges. Through education, training, publications, and events, we integrate theory and practice to inform public policy decisions worldwide. For more information visit www.lincolninst.edu.

About the Land Trust Alliance