For the 12th year in a row, New York City has a larger discrepancy in property tax rates for multi-family rental apartment buildings compared to owner-occupied homes than any other U.S. city, according to the annual 50-State Property Tax Comparison Study by the Lincoln Institute of Land Policy and the Minnesota Center for Fiscal Excellence.

Because of assessment limits, valuation practices, and other factors, the result is that the effective tax rate on a typical owner-occupied home is just one-fifth of the rate paid by the owner of an apartment building – costs that are in many cases passed along to renters.

The discrepancies in the New York City system emerge in a comprehensive analysis of the effective property tax rate – the tax payment as a percentage of market value – for residential, commercial, industrial, and apartment properties in more than 100 U.S. cities.

The report underscores the importance of the property tax as a stable source of revenue for cities, and the challenges of fine-tuning property tax systems in widely varying market conditions across the country.

Many of the cities with the highest property tax rates are struggling to make ends meet, dealing with a low tax base that requires higher tax rates to bring in enough revenue -- and constrained by state laws that restrict their access to other revenue sources that would allow them to reduce their reliance on property taxes. Detroit, which has the highest effective tax rate on a median valued home, has by far the lowest median home value of the cities covered in the report. In Bridgeport, which has the second highest rate on a median valued home, the city relies more heavily on the property tax to fund local government than any of the other cities covered in the report because of state laws restricting their access to other broad-based taxes.

But in other places, high or low property tax rates are largely the result of other policy decisions made by local governments. Nowhere is that more true than in New York City, which has one of the nation’s lowest tax rates on owner-occupied homes, while also having the highest tax rate on apartment buildings and the 2nd highest rate on commercial properties. There, a $1 million commercial property faces an effective tax rate that is 4.1 times higher than a median valued home, while a $600,000 apartment building has an effective tax rate that is 5.0 times higher. These are larger discrepancies than are found in any other city in the report.

The disparities in the New York City system, brought to light in many recent media reports, are the subject of ongoing research by the Lincoln Institute and the Regional Plan Association. That work will review the existing evidence, explore policy reforms that improve property tax efficiency and equity, and conduct empirical analysis to determine the incidence of proposed reforms on different groups of taxpayers, as well as their effect on tax revenues.

As the largest source of revenue raised by local governments, a well-functioning property tax system is critical for promoting municipal fiscal health. The 50-State Property Tax Comparison Study includes data for 73 large U.S. cities and a rural municipality in each state, plus an analysis that explains why tax rates vary so widely. This context is important because high property tax rates usually reflect some combination of heavy property tax reliance, with low sales and income taxes; low home values that drive up the tax rate needed to raise enough revenue; or higher local government spending and better public services. In addition, some cities use property tax classification, which can result in considerably higher tax rates on business and apartment properties than on owner-occupied homes, called homesteads.

Property tax reliance is one of the main reasons why tax rates vary across cities. While some cities raise most of their revenue from property taxes, others rely more on alternative revenue sources.  Cities with high local sales or income taxes do not need to raise as much revenue from the property tax, and thus have lower property tax rates on average. For example, the report shows that Bridgeport, Connecticut has one of the highest effective tax rates on a median valued home, while Birmingham, Alabama has one of the lowest rates. However, in Bridgeport, city residents pay no local sales or income taxes, whereas Birmingham residents pay both sales and income taxes to local governments. Consequently, despite the fact that Bridgeport has much higher property taxes, total local taxes are higher in Birmingham ($2,560 vs. $2,010 per capita).

There are wide variations across the country in property taxes on owner-occupied primary residences, otherwise known as homesteads. An analysis of the largest city in each state shows that the average effective tax rate on a median-valued homestead was 1.50 percent in 2016.  On the high end, there are three cities with effective tax rates that are roughly 2.5 times higher than the average – Detroit, Bridgeport, and Aurora (IL). Conversely, there are six cities where tax rates are less than half of the study average – Honolulu, Boston, Denver, Cheyenne (WY), Birmingham (AL), and Washington DC. 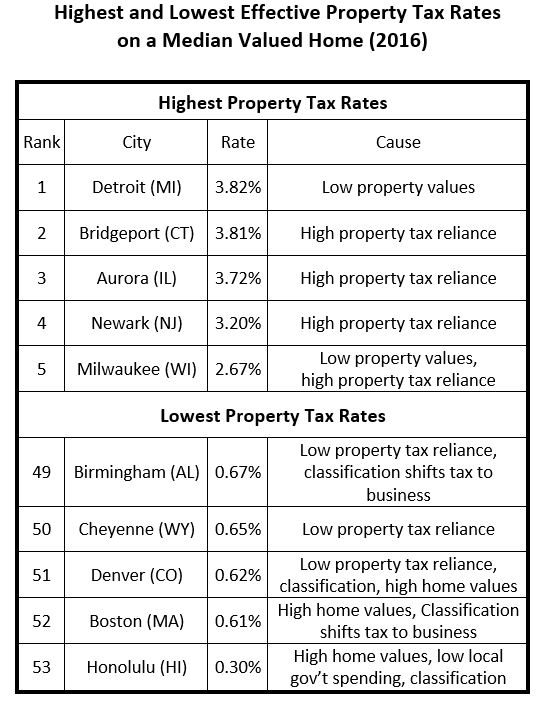 There are also significant variations across cities in commercial property taxes, which include taxes on office buildings and similar properties. In 2016, the effective tax rate on a commercial property worth $1 million averaged 2.10 percent across the largest cities in each state. The highest rates were in Detroit, New York City, Chicago, Bridgeport, and Providence, all of which had effective tax rates that were at least three-quarters higher than the average for these cities. On the other hand, rates were less than half of the average in Cheyenne, Seattle, Honolulu, Fargo, Billings (MT), and Virginia Beach. 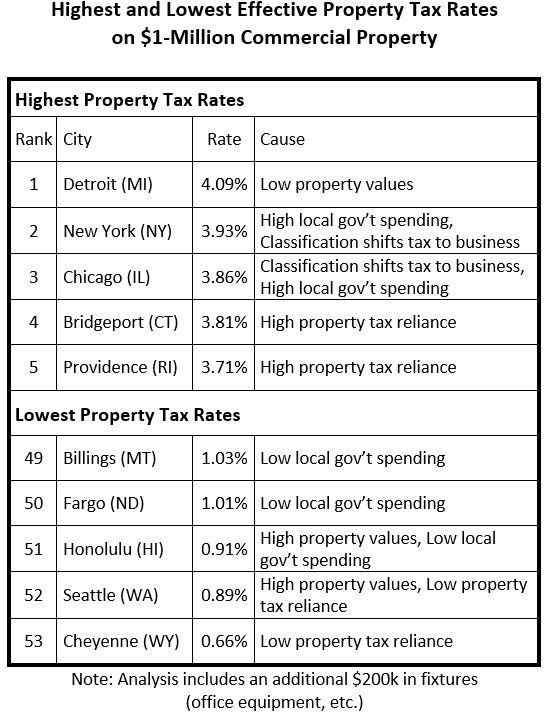 An analysis of the largest cities in each state shows an average commercial-homestead classification ratio of 1.67, meaning that on average commercial properties experience an effective tax rate that is 67% higher than homesteads. Roughly a fourth of the cities have classification ratios above 2.0, meaning that commercial properties face an effective tax rate that is at least double that for homesteads. 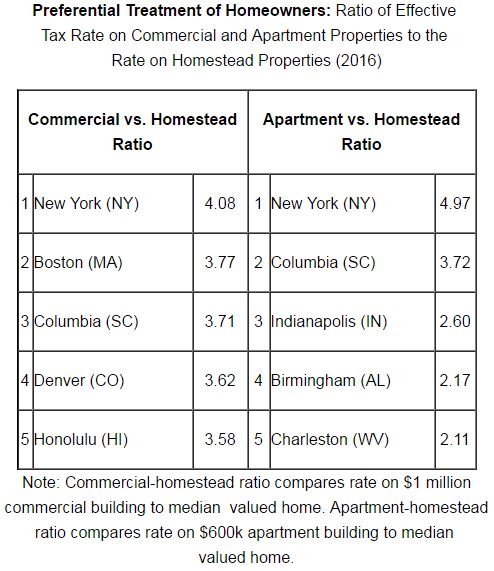 The average apartment-homestead classification ratio is significantly lower (1.35), with apartments facing an effective tax rate that is 35% higher than homesteads on average. There are five cities where apartments face an effective tax rate that is at least double that for homesteads, with New York City being a major outlier since the rate on apartments is almost five times higher than the rate on a median valued home. It is important to note that while renters do not pay property tax bills directly, they do pay indirectly since landlords typically pass through some or all of their property taxes in the form of higher rents.

Finally, the report also measures the impact of property tax assessment limits, which have been adopted by 19 states,. Assessment limits typically restrict growth in the assessed value of individual parcels and then reset the taxable value of properties when they are sold, based on two factors: how long a homeowner has owned her home and appreciation of the home’s market value relative to the allowable growth of its assessed value. As a result, assessment limits can lead to major differences in property tax bills between owners of nearly identical homes based on how long they have owned their home.

For example, in Los Angeles the average home has been owned for 13 years and the median home value is $542,100. Because of the state’s assessment limit, someone who has owned their home for 13 years would pay 39 percent less in property taxes than the owner of a newly purchased home, even though both homes are worth $542,100. The largest discrepancy is in New York City, which has an assessment limit that has capped growth in assessed values for residential properties since 1981, and unlike most assessment limits does not reset when the property is sold. Assessment limits in New York City provide the largest tax savings to homeowners in parts of the city where property values have grown the fastest since 1981, and the least savings to homeowners where property values have grown slowest.