How school funding in Arizona’s largest cities compares with other U.S. cities

In Arizona, teachers recently ended a statewide walkout after the state legislature agreed to increase funding to public schools. To anyone following developments in the funding of public education in the U.S., the recent events in Arizona should not come as a surprise. Compared to most states, Arizona spends very little on public education, only two-thirds of the national average according to the latest available data. Only Idaho and Utah spend less.

Although low levels of funding can affect all schools, public schools in central cities face a particular set of challenges. Their student bodies tend to include a heavy concentration of students from low-income families. Students come from a diverse set of backgrounds, often arriving at school with a limited knowledge of English. School buildings are often old and in need of extensive repairs or remodeling. These factors add to the amount of money city schools need to provide their students with a quality education.

In this blog post, I will compare school funding in Arizona’s three largest cities with education funding in central cities throughout the United States.

Comparing school financing across cities is complicated because the way school funding is organized varies tremendously across the country. Some central cities rely on a single independent school district to provide education, other cities are served by several school districts, while in still other cities, the municipal government or the county government provides education. To make valid comparisons across cities, the Lincoln Institute developed the Fiscally Standardized Cities (FiSC) database. The FiSC database contains detailed information on the revenues and expenditures of 150 large U.S. central cities for the years 1977 through 2015, the latest year from which data are currently available.

Why has education funding in Arizona’s largest cities fallen relative to spending in central cities elsewhere in the country? In 2008, average spending per child in the three Arizona cities was 78 percent of the national median; by 2015, it had fallen to 63 percent.

To better understand education spending patterns, it is necessary to explore how public education is financed. In Arizona, as in all states, the three levels of government, federal, state, and local, share in the funding of education. Data from the National Center for Education Statistics indicates that in the average state in fiscal year 2015, 9.2 percent of education revenues came from the federal government, 49.2 percent from the state government, and 41.7 percent from local governments. In Arizona, the federal share (12.9%) and the local share (43.3%) were higher than the national average, and the state share 43.8%), lower.

One reason for the decline in education spending in Arizona was the severity of the housing crisis during after the Great Recession. Local funding for education depends heavily on revenue from the property tax. Although in 2014, the market value of property per capita, a measure of the property tax base, remained slightly below its value 2008 value in the average FiSC, in Mesa, the property tax base had fallen by 38 percent and in Phoenix by 33 percent. Although local governments responded to their shrinking property tax bases by raising rates, the rate increases were not sufficient to prevent reductions in property tax revenues.

Without doubt, the single most important reason for the decline in education spending in Arizona was the reduction in state education aid in the period between 2008 and 2015. The state’s share of total public education revenue fell from 51.7 percent in fiscal year 2008 to 43.8 percent in 2015.

To understanding the reductions in state education aid in Arizona, one must look at the recent history of state government tax revenues. In most states, the Great Recession resulted in tax revenue reductions between 2007 and 2010. For the country as a whole, state governments tax revenues (in real per capita terms) fell by 13.9 percent during this three-year period. In Arizona, they dropped by 31.9 percent, more than in any other state.

The weak performance of state tax revenue in Arizona reflects both the severity of the recession and the housing crisis in Arizona, and decisions of the state legislature to reduce taxes, including most recently a cut in corporate income taxes.

The graph below, taken from a paper Howard Chernick and I published in the Journal of Urban Affairs in 2017 illustrates the relationship between changes in state tax revenue and change in state aid. The diagonal line shows the average relationship. The graph shows clearly that Arizona had a larger percentage reduction in state tax revenue than any other state, and because the state (labeled AZ) is below the diagonal line, that it cut total state aid more than proportionally. 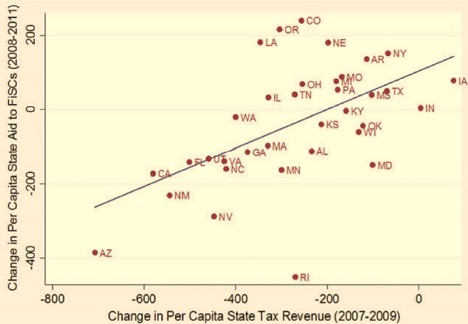 In summary, prior to the Great Recession, education spending in Arizona was low relative to the most other states. The Great Recession hit hard in Arizona and led to a substantial fall in state tax revenues. Unlike some other states, the state was unwilling to enact countercyclical tax policies to offset the decline in the state tax base. In response to declining revenues, the state legislature imposed particularly large cuts in state aid to public schools, and even in 2018 these cuts have still not been reversed. Combined with downward pressure on property tax revenues, local school districts were forced to cut spending on education. Since teacher salaries make up a large proportion of total education spending, the result was no raises for teachers for at least the last seven years.

Detailed fiscal data on the 150 fiscally standardized central cities can be found on the Lincoln Institute of Land Policy website at: http://datatoolkits.lincolninst.edu/subcenters/fiscally-standardized-cities/.