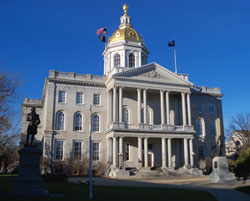 As if the weather wasn't enough, lawmakers in New England have been grappling with another kind of volatility: wild swings in tax revenue. State legislators from each of the New England states attended the annual Economic Perspectives on State and Local Taxes seminar at the Lincoln Institute last month to better navigate the situation. At the convening, organized in partnership with the New England Public Policy Center of the Federal Reserve Bank of Boston, tax and fiscal experts from across the country discussed revenue volatility, property taxes, infrastructure funding, and state tax reform.

Addressing current trends in property taxation, Phyllis Resnick, lead economist at the Colorado Futures Center, documented shifts in funding responsibilities and reduced accountability in Colorado's experience with TABOR and the Gallagher Amendment. Adam Langley, senior research analyst at the Lincoln Institute, spoke about two tools policymakers can use to provide direct property tax relief to homeowners: homestead exemptions and circuit breakers. Although all New England states use these mechanisms, they often cover small groups of taxpayers and provide modest benefits. In an update on tax increment finance (TIF), David Merriman, a visiting fellow at the Lincoln Institute, and professor at the University of Illinois at Chicago, predicted that government budget transparency will become a more prominent issue and that there will be increased opportunities to re-engineer TIF.

Frank Shafroth, the director of the Center for State and Local Government Leadership at George Mason University, highlighted challenges in funding infrastructure. He focused primarily on the federal government's inability to fund needed infrastructural repairs, and emphasized that states will be heavily affected due to this inaction.

In a final discussion of state tax reform. Billy Hamilton, executive vice chancellor and CFO of Texas A&M University Systems, and columnist for State Tax Notes, explored the usefulness, or lack thereof, of tax commissions. He argued that the tax studies of 25 years ago used to consider the state's tax system as a whole but more recently states have made use of tax studies that focus on a specific issue, such as tax competitiveness. Joseph Henchman, vice president of Legal and State Projects at The Tax Foundation, described recent tax reform initiatives in the District of Columbia, Indiana, New York, and North Carolina. Matthew Gardner, executive director of the Institute on Taxation and Economic Policy, concluded the seminar with a discussion of tax fairness. ITEP's recently released report Who Pays? A Distributional Analysis of the Tax Systems in All 50 States, Fifth Edition found ten states that had the most regressive tax systems: Arizona, Florida, Illinois, Indiana, Kansas, Pennsylvania, South Dakota, Tennessee, Texas, and Washington. All presentations are available for download

Five winning essays about innovations in land conservation, from a competition run by the Lincoln Institute in partnership with Global Post and The Groundtruth Project, have been smartly packaged at The Huffington Post. The new ideas in sustainability and finance were first presented at the 2014 World Parks Congress in Sydney, Australia, site of the launch of the Lincoln Institute book Conservation Catalysts. The winning submissions then appeared as individual full-length essays at The Groundtruth Project site over several weeks late last year.

The essays highlight innovations and initiatives from restoration efforts along the Colorado River to preserving jaguar habitat in South American rainforests, and tell the stories of the following:

The full story at The Huffington Post Green site can be viewed here.

A Case-Shiller Index for China

The urban housing hedonic price indices were constructed for eight urban housing markets, including Beijing, Shanghai, Tianjin, Shenzhen, Chengdu, Dalian, Wuhan, and Xi'an. The joint team worked for the last four years to develop the indices, with original housing price data provided by a partner, Shenzhen World Union Appraisal Co. Ltd. The core methodology for compiling the indices is a variant of the hedonic repeated-sale hybrid model, first developed in the Case-Shiller Home Price Indices in the U.S. During the construction of the indices, several international experts offered technical advice, including Karl "Chip" Case, co-founder of the Case-Shiller Index, former Lincoln Institute president Gregory K. Ingram, Joyce Man, former director of the China program and now director of the Indiana University Research Center for Chinese Politics and Business, David Geltner, and Daniel McMillen, a visiting fellow at the Lincoln Institute. The indices, available online, will be updated on a quarterly basis and will be expanded to cover more urban housing markets where data become available.

The story of Lizzie Magie, inventor of The Landlord’s Game, precursor to Monopoly, was told in The New York Times ... Healthy habits of effective anchor institutions, co-authored by Lincoln Institute President George W. "Mac" McCarthy – who also appeared in this in-depth interview in Shelterforce magazine last month ... Fellow Daphne Kenyon weighs in on cash-strapped governments targeting non-profit institutions for tax revenue ... On the topic of infrastructure, as noted in the State of the Union address: using value capture, maintaining what we have, and the ongoing dialogue fostered by recently appointed board member Ray LaHood ... Is gentrification all that bad? Plus, new maps showing inequities in income and transportation ... Our research shows struggling cities can recover ... David Beckham, Madonna, and the favela ... The Lincoln Institute had a big presence at the New Partners for Smart Growth conference in Baltimore, as we explored equity and regeneration in Legacy Cities and participated in a poverty simulation; next up, the Rocky Mountain Land Use Institute annual convening in Denver March 12-13 ... This month's highlighted Working Paper: Lessons from the Ground Up: Approaches to Squatter Settlements, by Julio Calderón Cockburn.