Land and the City 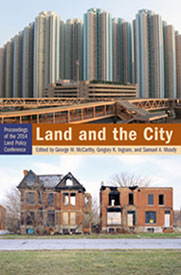 Amid unprecedented challenges facing the world's cities, the Lincoln Institute has published an e-book that explores the centrality of land to the global urban future, and offers insights for cities grappling with changing planning, financing, and housing needs.

The e-book, Land and the City, is a compilation of the proceedings from the Lincoln Institute's 2014 Land Policy Conference, edited by Lincoln Institute President George W. McCarthy, former President Gregory K. Ingram, and Program Manager Samuel A. Moody.

Drawing from a broad array of expertise and research, the book demonstrates how land policy shapes issues as diverse as the sustainability of local government revenues, the impacts of the foreclosure crisis, and urban resilience to climate change. The book contains four sections:

New England legislators focused on the long run fiscal challenges of funding infrastructure and crafting tax systems that will be fair, efficient, and stable at the annual Economic Perspectives on State and Local Taxes seminar at the Lincoln Institute earlier this month. State legislators from each of the six New England states reviewed trends in capital spending and infrastructure needs, property taxes, and state business taxes at the event, organized in partnership with the New England Public Policy Center of the Federal Reserve Bank of Boston.

The presentations can be viewed on our SlideShare page by clicking on the name of each speaker.

Ron Fisher, professor of economics at Michigan State University and visiting scholar, New England Public Policy Center at the Federal Reserve Bank of Boston, found that capital spending in New England is significantly below the national average by all measures, possibly due to efforts to limit government debt. Brian Pallasch, managing director for government relations and infrastructure initiatives of the American Society of Civil Engineers, pointed to a $1.6 trillion gap nationally in infrastructure spending over the next five years. Edi Tebaldi, associate professor of economics at Bryant University, suggested that public-private partnerships could help. Fellow Lourdes Germán presented on the current realities of how municipalities fund infrastructure via bond financing.

John Anderson, professor of economics at the University of Nebraska and a visiting fellow at the Lincoln Institute, concluded that the property tax remains the most stable revenue source over time, compared with the sales and income tax. Bo Zhao, senior economist at the New England Public Policy Center of the Federal Reserve Bank of Boston, shared research on non-school fiscal disparities in Connecticut.

In a broad-ranging discussion of reforms in state taxation of business, David Merriman, professor of public administration at the University of Illinois-Chicago, argued that states need to think strategically about how they tax businesses, keeping in mind the tradeoff between revenue generated and jobs created. Jared Walczak, a policy analyst with the Tax Foundation, looked at how state tax costs of doing business vary by state and by business type. Greg LeRoy, executive director of Good Jobs First, presented a study of economic development programs in the U.S., finding that large businesses reap the vast majority of tax incentive dollars, thereby shortchanging small business. Finally, LeAnn Luna, a professor at the University of Tennessee, concluded the seminar with a strong critique of the state corporate income tax, and an explanation of some alternatives including a gross receipts tax or value added tax.

The annual seminar aims to improve dialogue and inform policymakers in the Lincoln Institute's continuing campaign to promote fiscal health.

The use of preferential tax treatment to protect rural land from development in the U.S. has been largely ineffective, with the benefits often outweighed by the costs, according to a new report published by the Lincoln Institute of Land Policy. The use of use-value assessment - the undervaluing of rural properties to reduce the tax burden - has been modestly successful in protecting some land, but the policy has been implemented poorly in many states, often with unintended consequences.

The report is based on a book published in 2014, and has been condensed to give policymakers and their staffs, as well as property tax experts and practitioners, a snapshot of the history and consequences of use-value assessment, as well as options for reform.

In a practice that began in the 1960s amid concerns about rapid urbanization, nearly every U.S. state now permits, and even requires, local assessors to value some rural properties below their fair market value to encourage their continued use for agriculture, or preservation as forestland or open space.

Despite their stated purpose of protecting farms and other rural properties from development, these policies often benefit "fake farms" intended for future development, or "hobby farms" that are not true commercial enterprises. These policies also employ inconsistent or inaccurate methods for assessing the use-value of a property, or the value of the farm as currently used (in contrast with the market value, which is typically higher because it considers the potential for development).

In addition, many state policies do not adequately penalize landowners who enjoy tax benefits for many years, only to sell their land for development. Finally, use-value assessment often fails to evaluate the public benefit of preserving a particular piece of land or type of property.

The authors recommend several reforms to improve use-value assessment, including weeding out fake farmers by tightening eligibility and reporting, disqualifying landowners who have pending applications for rezoning, stiffening penalties that are either nonexistent or weak, standardizing the practice of assessing a property's use-value, and taking the public value of a property into consideration.

Fellow Lourdes Germán creates a digital bridge for better municipal fiscal health ... Our book, Zoning Rules! by William Fischel makes Planetizen's Top 10 ... In Detroit, our property tax ideas resonate while George W. "Mac" McCarthy weighs in on the housing market ... Debate heats up in our backyard around affordable housing, office tower signs, and what it means to be "business friendly" ... Europe builds on our land conservation work ... The International Association of Assessing Officers recognized the Lincoln Institute for decades of excellent research ... This month's highlighted Working Paper: Measuring Urban Attitudes Using Twitter: An Exploratory Study by Justin B. Hollander and Henry Renski.

Happy Holidays from all of us at the Lincoln Institute of Land Policy!