Rebuild for resilience, not just recovery 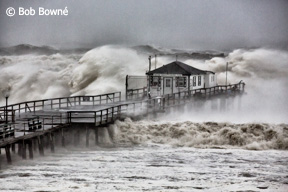 A new federal framework for disaster recovery would make coastal regions more resilient and save billions, according to Lessons from Sandy: Federal Policies to Build Climate-Resilient Coastal Regions, co-authored by Robert Pirani and Laura Tolkoff of the Regional Plan Association. The report was announced at the RPA’s Regional Assembly in New York last week.

"It is clear that our coastal communities cannot just simply rebuild after climate events like Superstorm Sandy. They must rebuild smarter and stronger," said Armando Carbonell, senior fellow and chairman of the Department of Planning and Urban Form at the Lincoln Institute. "Federal policies must be re-aligned to ensure that resilience is part and parcel of recovery efforts."

The report recommends a series of necessary changes in disaster recovery, recalibrating the process of funding relief and recovery efforts, modifying regulations, and putting incentives in place to encourage better adaptation to the inevitable impacts of climate change - volatile weather, sea level rise, and storm surge. Greater resilience must be built into the repair of vital transportation and energy infrastructure in particular, the report says.

A new approach to rebuilding that addresses both short-term needs and long-range planning will require changes across the board in disaster recovery, from the National Flood Insurance Program to the Federal Emergency Management Agency to the work of the US Army Corps of Engineers – all in coordination with state and local governments. The report also calls for more clarity about how National Environmental Protection Act and other environmental standards and reviews apply to recovery efforts.

As the wakeup call that elevated the discussion about disasters and climate change at all levels of government, Sandy made it clear that current recovery strategies, urban planning, and coastal management practices were no longer viable; in the face of rising sea levels, these outdated approaches undermine riverine and coastal ecosystems, endangering people, property, and regional economies that represent a significant portion of national GDP.

Lessons from Sandy identifies a set of policies, regulations, and administrative practices that federal agencies can adopt to help coastal metropolitan areas become more resilient. In addition, the research documents how state and local governments recovering from Hurricane Sandy sought to use federal aid to create a more resilient region, and it describes the obstacles they encountered.

The authors establish why coastal regions matter and warrant stronger support from federal policies, for a more integrated approach to managing our nation's coastal resources. They recommend reforms to existing policies, regulations, and administrative procedures that could make disaster recovery aid more flexible and supportive of climate adaptation. Without such reforms, it will be difficult for cities and their regions to adapt to climate change and for the federal government to reduce its fiscal exposure in the face of extreme weather events.

In examining federal flood insurance and risk management approaches, the authors detail reforms and incentives to help regions appropriately regulate vulnerable coastal areas while sustaining them as attractive places to live and do business.

At APA in Atlanta

Resilience, smart cities, and resolving land use disputes were among the topics explored by experts from the Lincoln Institute at the American Planning Association's National Planning Conference April 25-30 in Atlanta.

Following fellow Peter Pollock’s all-day retreat with planners from the Atlanta region, the convening began with a rousing talk by Acting Surgeon General Boris Lushniak, who underscored the importance of well-designed walkable communities to promote physical activity, and noted the long history of public health and planning, going back to Frederick Law Olmsted.

Statewide planning programs have gone up and down, from Maryland to Massachusetts to Florida and California, but states remain "engines of planning innovation," said Timothy S. Chapin, associate professor at Florida State University, who joined Armando Carbonell and Maryland planning secretary Richard E. Hall in the discussion, The State of State Planning. The National Collaborative of State Planners seeks to establish a network for the exchange of best practices at the state level.

Anthony Townsend, author of Smart Cities: Big Data, Hackers, and the Quest for a New Utopia sought to "cut through the hype" of corporate marketing on the subject of smart cities. "From an urban planner's point of view, we need more things to hold onto," he said at the session Intelligent Cities: Top-Down, Bottom-up, or Sideways, with retired IBM engineer Colin Harrison. Smart cities seem to be at a point similar to the differing visions of Robert Moses and Jane Jacobs, he said: attempting to balance a top-down engineering approach and more citizen efforts in developing apps. He also noted how the collection of data – sometimes without public consent, such as through cell phones or tooth booths – results in excellent planning outcomes, in analyzing commuter patterns, for example. The downside in terms of privacy is that "we as planners may end up doing things that make people angry just like with the NSA."

Peter Pollock joined Ona Ferguson and Sean Nolon, co-authors with Patrick Field of Land in Conflict: Managing and Resolving Land Use Disputes for a "deep dive" in Managing and Resolving Land Use Disputes, helping planners navigate the increasingly contentious public hearing process. The key is determining the goal to be achieved, and taking advantage of the moment to spell out the big picture – before positions are entrenched. "Sometimes it may seem that there is not a lot of hearing in a public hearing," said Pollock.

At the session that was the culmination of the annual fall gathering of planning directors, Big City Planning Directors on Climate Resilient Cities, Henk Ovink, senior adviser to HUD secretary Shaun Donovan in the much-anticipated Rebuild by Design competition, shared the innovations and, critically, implementation strategies for building resilience in Connecticut, New York and New Jersey post-Sandy. "You can't do this overnight," Ovink said. Working with water in The Netherlands goes back centuries, he said, and after "our Sandy," a killer storm in 1953, the nation redoubled efforts in physical and social resilience. What communities don't have, he said, is "time to think." Rebuild by Design, where finalists are expected to be chosen in the coming days, is "not about making a plan, but changing the culture."

Today's final sessions include Exploratory Scenario Planning and Emerging Tools, with Ray Quay of Arizona State University, one of the co-authors of the network initiative and report Opening Access to Scenario Planning Tools, along with Ted Cochin, senior policy analyst at EPA's Office of Sustainable Communities, Hannah Oliver, program associate for Western Lands and Communities, the Lincoln Institute's joint venture with the Sonoran Institute, Joe Marlow, senior economist at the Sonoran Institute; and Laura Tolkoff, associate planner at the Regional Plan Association and co-author of Lessons from Sandy, which incorporates scenario planning strategies into the recommended approach to rebuilding after disaster.

Global urbanization can be an overwhelming concept, with the planet's urban population expected to surge to six billion – two-thirds of the entire global population – and an estimate one billion people already living in substandard informal settlement, or slums. Yet UN-HABITAT continued its ambitious agenda to encourage humane and equitable urban development in the developing world, at World Urban Forum 7 in Medellín earlier this month. The Lincoln Institute delegation made its own important contributions to the dialogue, on the subjects of building resilience in the context of climate change impacts and the use of value capture as a tool for financing urban development and infrastructure. Armando Carbonell and Martin Smolka, director of the Latin America program, led discussions in formal sessions and at the Innovative Americas pavilion hosted by The Next City, the Kresge Foundation, and the Ford Foundation.

The Spanish translation of the book Planet of Citieswas announced at the forum, as was the Spanish translation of the Policy Focus Report Implementing Value Capture in Latin America: Policy Tools for Urban Development - Implementación de la recuperacion de plusvalías en América Latina: Políticas e instrumentos para el desarrollo urbano, and the publication Instrumentos Notables de Intervención Urbana, a volume based on a major conference in Quito last year, published in partnership with the Banco del Estado del Ecuador. Also at the forum, Lincoln Institute president Gregory K. Ingram formally launched the initiative to add to the Atlas of Urban Expansion, which tracks the growth of hundreds of cities over time through satellite and other data, through 2015, in partnership with UN-HABITAT and the Urbanization Project at New York University's Stern School of Business.

Martim Smolka led his now-traditional workshop in the regularization of informal settlement, Urban Equity Outcomes: Enabling Policies and Tools to Access Land and Housing, in partnership with Housing and Urban Development Studies-IHS. There was much in the host city to appreciate in terms of interventions aimed at improving conditions in the poorest neighborhoods, from the efficient metro and bus rapid transit system and the Jardín Circunvalar, to the cable cars that glide over the tin roofs of makeshift homes, and the escalators installed to spare residents grueling hikes up and down the slums reaching up from the valley. The efforts have made Medellín, formerly a global crime capital, an urban planning mecca of sorts, and drawn no little attention, including articles in the New York Times and CNN, and How Medellín Revived Itself in Citiscope and Latin America's New Superstar in Next City.

Senior fellow Armando Carbonell looks at millennials and other demographic trends in land and living this interview with the Phoenix NPR station ... The city was the sports arena for this year's Boston Marathon, raising complex issues after last year's bombing ... Videos of spring lectures by Helen Lochhead on designing resilience and Mark Skidmore on Detroit's bankruptcy are now live on the website ... Faculty profiles, more detail on each syllabus, and information about gaining credits are all now available at the Lincoln Institute's online education courses ... America's housing mismatch points to an over-supply of single-family homes, according to Arthur "Chris" Nelson ... This month's highlighted working paper: The Window Tax: A Case of Excess Burden, an analysis of Great Britain's policy of taxing property based on the number of windows in buildings - swiftly prompting owners to board up fenestration and reduce the number of windows in new buildings – by Robert M. Schwab and Wallace E. Oates.