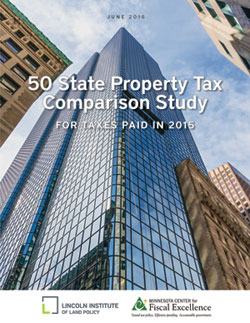 The Lincoln Institute released the latest edition of its annual report on property tax rates in all 50 U.S. states, with a new analysisof how communities raise revenue to pay for basic public services (see coverage by Governing Magazine and Forbes).

The 50-State Property Tax Comparison Study, produced in partnership with the Minnesota Center for Fiscal Excellence, tracks the effective tax rate - the tax payment as a percentage of market value - for residential, commercial, industrial, and apartment properties in more than 100 U.S. cities.

For the first time, the report analyzes why tax rates vary from city to city, exploring factors such as the reliance on property taxes relative other revenues such as the sales tax; the variation in property values; the differential treatment of residential and commercial property; and the level of local government spending. The report also explores the impact of property tax assessment limits, which constrain local governments and distort tax rates for owners of similarly valued properties.

"The property tax is a critical source of revenue for local government services, from education to public safety," said Joan Youngman, chair of the Lincoln Institute's Department of Valuation and Taxation. "This report provides a snapshot of property taxation across cities, one step toward a fuller picture of how communities meet their responsibility to serve their citizens."

Bridgeport, Connecticut continues to rank at the top for the property tax rate on the median valued home, a reflection of its heavy reliance on the property tax - residents pay no local sales or income taxes. Birmingham, Alabama, by contrast, has the fourth-lowest property tax rate, but total local taxes are 27 percent higher than in Bridgeport once sales, income, and other local taxes are taken into account. Other cities with high property tax rates, such as Detroit (2nd highest) and Milwaukee (5th highest), have low property values, requiring relatively high tax rates to meet even the most basic public service needs.

New York City ranks at the top for property tax rates for apartments. Its ranking reflects the city's high "classification ratio" - the extent to which it favors owner-occupied housing over other properties. In New York City, the tax rate on apartments is more than five times higher than on the median valued home.

When it comes to commercial property, Detroit, New York, and Providence, Rhode Island have the highest tax rates, with different contributing factors in each city. In Detroit, low property values require higher rates to fund services in the struggling city. In New York's red-hot real estate market, policy makers have chosen to shield homeowners by shifting the burden to commercial property. And in Providence, the city has historically relied heavily on the property tax, compared with other local revenues.

The report also analyzes the effect of assessment limits, which restrict the ability of cities to re-assess properties to fully reflect increases in the market value. In Long Beach, California, for example, the owner of a newly purchased home pays 40 percent more than someone who has owned the same home for 14 years, the greatest disparity in the country. New York City ranks second with a 37-percent disparity, and Los Angeles ranks third at 35 percent.

The Lincoln Institute and the Minnesota Center for Fiscal Excellence have co-produced the 50-state comparison study for the last five years. The report released today, based on 2015 data, is available at the Lincoln Institute subcenter Significant Features of the Property Tax, which offers detailed data on the property tax in 50 states and the District of Columbia. Last year's report is available here.

The traditional cadastre - a public land registry typically used to track ownership and property taxation - is being reimagined throughout Latin America as a powerful tool to promote fiscal stability and guide urban planning initiatives, including building resilience in the face of climate change, according to new research published by the Lincoln Institute.

Advances in technology and data crowdsourcing have made this new multipurpose cadastre possible, say Diego Alfonso Erba and Mario Andrés Piumetto, authors of Making Land Legible: Cadastres for Urban Planning and Development in Latin America. Successful implementations of the multipurpose cadastre in cities in Colombia, Brazil, and other countries have demonstrated its benefits to policy makers, write the authors, both veteran land surveyors with years of experience in research and practice in this burgeoning field.

A territorial cadastre is a public registry that manages information relating to parcels of land. In much of Latin America, cadastres are structured under the orthodox model imported from Europe long ago, which accounts only for economic, physical, and legal characteristics. This model has several limitations: it is typically restricted to private properties; much of the information may be out of date and incomplete; and it does not encompass key parcel-level data needed for urban policy decisions—such as information on transportation, infrastructure, and utility networks—which is scattered among several unconnected institutions and in different formats.

A multipurpose cadastre is based on a partnership of stakeholders committed to generating extensive, precise, detailed, and up-to-date information about a city. It shares alphanumeric data and maps as well as human and financial resources, and can be implemented at the national, regional, or local level at reasonable cost. The use of camera-equipped unmanned aerial vehicles, or drones, can provide extensive information quickly.

Latin America - with vast uninhabited areas and extensive urban sprawl, the Amazon jungle and increasing deforestation, and tremendous wealth and crushing poverty existing side by side - is a unique testing ground. Part of the legacy of colonization is a lack of accurate records, which continues to facilitate illegal land occupations that persist to this day and strongly conditions urban policies—particularly those related to tenure security and tax collection practices.

Although it does not define land policies, a multipurpose cadastre is a key instrument for that purpose. Planners need information to manage the growth of cities, define strategies for financing urban development, and to reduce informality and analyze the impact of government interventions. The information is also critical for disaster preparedness and adaptation to the impacts of climate change.

Making Land Legible describes the evolution of cadastres, and surveys the adoption of the multipurpose model and associated benefits. The authors also spell out best practices to facilitate a shift to multipurpose cadastres, including building land value observatories that involve the greatest number of partners possible; implementing assessment methods based on econometric and geostatistical models that can correlate assessment maps with the real estate market; mandating the georeferencing of parcels and requiring updated blueprints on each real estate transaction; and incorporating data on public properties and informal settlements in cadastre maps.

The Lincoln Institute continued its engagement in the runup to Habitat III, the major UN summit on cities set for October in Quito, Ecuador, with the announcement of the Sample of Cities, a new tool for measuring global urbanization that could help monitor implementation of the New Urban Agenda, the framework expected to be adopted in Quito. The Lincoln Institute will further explore the theme of implementation through a dialogue with the U.S. Department of Housing and Urban Development and policy experts on July 11. And on July 25-27, the institute will take part in the final Habitat III Preparatory Committee meeting in Surabaya, Indonesia, which will set the stage for the October summit ... Thomson Reuters Foundation interviews Latin America program director Martim Smolka about the importance of land tenure for improving conditions in Brazil's slums ... The Thai cabinet approves a land and buildings tax ... The Chesapeake Conservancy shares an exciting use of mapping technology, with potential for our partnership to map land use and understand the water-land nexus ... We're working with HUD on the Prosperity Playbook to create opportunity in cities through better access to housing, jobs and transportation ... Lourdes Germán explains green bonds ... The Lincoln Institute convened more than 60 instructors and graduate students from throughout Latin America in Panama City last month to discuss key issues and content for professional development and distance education courses. Themes included the property tax and other land-based financing tools, urban development, land markets, informal settlements, and the environment ... The Peking University-Lincoln Institute Center for Urban Development and Land Policy held two major conferences in May - the International Symposium on Land Policy and Housing Markets at the University of Hong Kong, where speakers included renowned Harvard economist Edward Glaeser; and the International Symposium on Urban Fiscal Sustainability in China, held in Beijing in collaboration with the China Urban Forum 100, the Center for City and Competitiveness of the China Academy of Social Science, and the Hangzhou International Urban Research Center ... Amy Cotter, the institute's manger of urban development programs, will join PlaceMatters CEO Ken Snyder later this month at the National Association of Regional Councils Annual Meeting for a panel discussion on scenario planning tools and their potential to become more widely available, usable, and powerful ... Four Lincoln Institute courses were approved for American Institute of Certified Planners credit: Local Communities Adapting to Climate Change, Land Use and Property Rights in America, Practical Ecology and Resolving Land Use Disputes ... This month's highlighted Working Paper: Bubble Economics: How Big a Shock to China's Real Estate Sector Will Throw the Country into Recession, and Why Does It Matter? by Bryane Michael and Simon Zhao.