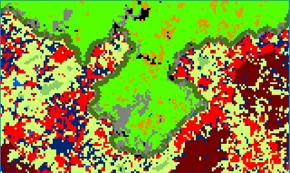 The Atlas of Urban Expansion, a critical online resource for data and images tracking global urbanization, will be updated and expanded in a new 2015 edition to reflect the scope of large and fast-growing metropolitan areas around the world.

At the World Urban Forum in Medellin this spring, leaders from the United Nations Human Settlements Programme (U.N. Habitat), the Lincoln Institute of Land Policy, and the NYU Stern Urbanization Project signed an agreement to support the research leading to the online publication on their respective websites of the Atlas of Urban Expansion: The 2015 Edition.

The signing ceremony included Eduardo Moreno, head of the Research and Capacity Building Section at U.N. Habitat, Gregory K. Ingram, the president of the Lincoln Institute, and Paul Romer, the director of the NYU Stern Urbanization Project and the Marron Institute. The work on the Atlas will be supervised by NYU's Shlomo Angel, and will involve a team at the University of Connecticut, headed by Daniel Civco.

The mapping of global urbanization in the 21st century is of critical importance in what has been described as the urban century. Today over half the world's population lives in cities; in the coming decades, two-thirds of the global population will be in cities - six billion people out of a projected total of nine billion. The growth will occur predominantly in sub-Saharan Africa and Asia. In many cases, the fast-growing cities of the developing world are inadequately prepared to accommodate this rapid growth. The UN estimates that approximately one billion people already live in informal settlements in substandard conditions, and that two-thirds of rural migrants moving into cities in sub-Saharan Africa are moving directly to informal settlements, or slums.

Keeping track of urban expansion is thus a critical component of informing policy and assisting cities in planning for the future. The Atlas of Urban Expansion 2015 Edition will contain maps and metrics describing the expansion of a new global sample of 200 cities, an increase from the 120 cities originally studied. The sample represents five percent of the universe of all cities in the world that had populations of 100,000 or more in the year 2010; it is a stratified sample, containing cities in eight world regions, in four population size classes, and in three categories of countries, based on the number of cities in the country.

As in the first edition, the new Atlas will be based on the classification and mapping of Landsat satellite imagery in combination with census-based population data for the administrative districts comprising the built-up areas of cities. It will contain maps and metrics for each of the 200 cities in the sample for the three time periods, 1990, 2000, and 2010. Metrics will include the extent of built-up areas for each city, the population of the city, the average density of its built-up area, the increase in the city area brought about by the inclusion of the open spaces in and around its built-up area, and the extent to which the city is compact-its footprint resembling a circle.

While the focus of the Atlas is on the quantitative aspect of urban expansion, future phases of a broader initiative, Monitoring Global Urban Expansion, will focus on quality, including such measures as walkability, arterial grids, open space, affordable housing, and the provision of basic services such as water and sewer.

Without evidence that the expansion areas are accessible to jobs or whether land and housing in expansion areas are affordable, which establishes a relationship between public preparation for urban expansion and the quality of the built environment, urban policymakers will continue to act without an empirical basis for their decisions. Future phases of the initiative involve the analysis of high-resolution satellite imagery of the expansion areas of all the cities in the sample, and engaging people on the ground in each of the cities in the sample. These phases are currently in a pilot stage, being tested in four cities: Addis Ababa and Mekele in Ethiopia and Bogotá and Valledupar in Colombia.

The policy of lowering property taxes on rural land helps protect farms and vital ecosystems, but reforms are needed to curb abuses, according to researchers at the Lincoln Institute. John E. Anderson and Richard W. England, authors of Use-Value Assessment of Rural Land in the United States, also suggest the policy be fined-tuned to take into account fairness and whether housing or other development might be appropriate on some parcels.

Across the nation, state and local governments have adopted a number of policies to regulate the conversion of rural land to developed uses. One of the most significant and least understood is preferential assessment of rural land under the real property tax, often called use-value assessment or current-use assessment. Nearly all states across the country permit, and even require, local assessors to value some parcels of undeveloped land far below their fair market value for the purpose of levying local property taxes-in order to encourage their continued use to support agriculture, working landscapes, and valuable ecosystems.

Despite their stated purpose of preserving rural lands from urban development, use-value assessment programs can have unintended negative consequences. One is erosion of the legal and constitutional principle of uniformity of taxation; another is shifting the local tax burden to other property owners, arguably in a regressive manner.

Abuses are also a problem, as "fake farmers" enjoy low property tax bills, while using the land to sell firewood or Christmas trees to a few friends and neighbors. Others are clearly preparing land for development, taking advantage of the preferential assessment in the meantime.

The authors review several ways of tightening eligibility and reporting in use-value assessment programs, such as raising the minimum amount of revenue gained by agricultural use of land, and requiring better documentation of same; disqualifying landowners who have pending applications for rezoning, install survey stakes, or put in utility services not required for agricultural use; and stiffening penalties that are either nonexistent or weak.

Use-Value Assessment of Rural Land in the United States explains the origins, key features, impacts, and flaws of use-value assessment programs across the United States as a fiscal tool for primarily farmland preservation. It describes in detail the process and characteristics of use-value assessment programs in 44 states, and recommends reforms that can serve as a road map for public officials, scholars, and journalists concerned with agricultural taxation and land use issues.

John E. Anderson is the Baird Family Professor of Economics at the University of Nebraska-Lincoln. Tax policy is the focus of his research; he has advised government agencies in the United States and around the world and served from 2005 to 2006 with the President's Council of Economic Advisers in Washington, DC. Richard W. England is professor of economics at the University of New Hampshire-Durham. His research concerns property taxation, land development, conservation, and housing markets. Together with Richard F. Dye, he edited the Lincoln Institute book Land Value Taxation: Theory, Evidence, and Practice (2009). Anderson and England are both visiting fellows at the Lincoln Institute.

The Lincoln Institute announced recipients of the David C. Lincoln and C. Lowell Harriss Fellowships for 2013-2014, named as part of a continuing effort to support research on the cutting edge of tax and land policy.

The C. Lowell Harriss Fellowships, named in honor of the late Columbia University economist who served for decades on the Lincoln Institute's board of directors, support work on dissertations. The recipients and their topics are:

Harriss, who died in 2010 at 97, authored a dozen books and several hundred articles on land and tax policy. A native of Nebraska, he earned a bachelor's degree in economics from Harvard in 1934, and joined the economics faculty at Columbia University four years later. He simultaneously worked on his doctorate in the discipline, which he earned from Columbia in 1940. He was a visiting professor at Stanford, Yale, Princeton, the University of California at Berkeley, the Wharton School at the University of Pennsylvania, and Peterhouse College at Cambridge University. He won Fulbright professorships at the Netherlands School of Economics and the University of Strasbourg in France. He was a board member of the Lincoln Institute of Land Policy from 1974 until 2009.

The David C. Lincoln Fellowships in Land Value Taxation (LVT) were established in 1999 to develop academic and professional interest in this topic through support for major research projects. The fellowship program honors David C. Lincoln, former chairman of the Lincoln Foundation and founding chairman of the Lincoln Institute, and his long-standing interest in LVT. The program, administered through the Lincoln Institute's Department of Valuation and Taxation, encourages scholars and practitioners to undertake new work in the basic theory of LVT and its applications. These research projects add to the knowledge and understanding of LVT as a component of contemporary fiscal systems in countries throughout the world. The 2013-2014 DCL fellowships announced here constitute the 14th group to be awarded:

Tweaking TIF for the 21st century, plus Joan Youngman's take ... A look at the Garden City planning tradition for future development ... this month's highlighted working paper: BRT-Oriented Development in Quito and Bogotá, by Daniel A. Rodriguez and Erik Vergel, with support from William Fernando Camargo Triana.